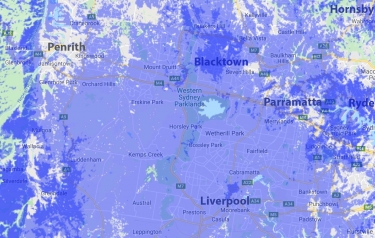 The network of approximately 2,700 km2 provides umbrella Long Range Wide Area Network (LoRaWAN) connectivity and is expected to be the largest carrier LoRaWAN network in the Sydney region.

It is estimated to cover 80% of the Greater Sydney population, including a number of Local Government Areas including Parramatta, Liverpool, Blacktown, Bankstown, Ryde and the Hills District.

The network coverage has been established with multiple LoraWAN gateways in different parts of Sydney including a recent major tower installation in Horsley Park, Western Sydney.

“It provides confidence for councils and business to develop their IoT plans knowing that the core infrastructure is there and ready for further expansion as needed.”

Tilbrook says NNNCo will work with local and state government bodies as well as enterprise to extend and deepen coverage in line with market growth and provide full coverage for enterprise-grade IoT deployments - and unlike the traditional ‘build it and they will come’ network model, its business model enables it to build coverage on demand and in partnership with IoT users.

The company has announced other major network expansions in 2020 including a partnership with Agriculture Victoria to build network across Victorian regions for agriculture, and one with Tas Networks and subsidiary 42-24 to build a statewide enterprise LoRaWAN network for Tasmanian IoT deployments.

“This is an important step in ensuring business and Councils across Greater Sydney can benefit from the maturing IoT market that is ready to scale and deliver those promised outcomes.”

The network coverage has been established with multiple LoraWAN gateways in different parts of Sydney including a recent major tower installation in Horsley Park, Western Sydney.

More in this category: « Retail tech startup Tiliter raises $7.5 million for European, US expansion India allows launch of WhatsApp payments service for 20m users »
Share News tips for the iTWire Journalists? Your tip will be anonymous