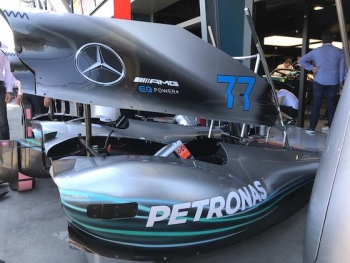 The Mercedes-AMG Formula One team's collaboration with Epson is a real technology partnership, team principal and chief executive Toto Wolff said during preparations for this week's Melbourne Grand Prix.

Augmented reality and artificial intelligence are the future, he said.

So far, the only publicly-disclosed application has been as part of the team's garage tour.

That AR experience is being upgraded for the 2018 series, but the project wasn't completed in time for the Melbourne Grand Prix.

Aside from Moverio, Mercedes-AMG uses Epson products everywhere, according to Wolff. Examples include desktop printers and POS-style displays that travel with the team. "You can unpack them and they deliver," he said.

Another example is that large-format Epson printers are used to produce the livery for the trucks used to transport team equipment to F1 races in Europe.

Wolff explained that about five years ago, the team decided to focus on a smaller group of partners who could provide added value. "It's very selective," he said.

When it comes to principles such as constant development, "we're [all] on the same wavelength", he said.

"Each of these [partner] brands are the best in their area," said Wolff, and they also display important characteristics including integrity and loyalty. "It is the absolute reality."

More in this category: « QBE aligns technology and transformation in restructure Employment Hero boosts coffers with $8 million funding raise »
Share News tips for the iTWire Journalists? Your tip will be anonymous