Intel used its sponsorship of this week's Connect Expo and the associated Next Big Thing conference to promote the benefits of the sixth-generation Core and Core vPro CPUs.

Intel computing group vice president and general manager of business client platforms Tom Garrison (pictured above) drew attention to Intel Authenticate, a feature of the sixth-generation CPUs that stores biometric data, credentials and security policies within the chip, where it is more securely protected.

The idea appears to be similar to the secure element found in mobile phones.

Intel Authenticate works with Windows 7, 8.1 and 10, providing additional options during the login process. Entering a blank password causes Authenticate to kick in. Depending on the policies it will look for one or more factors: the presence of a particular mobile phone (identified via Bluetooth), a fingerprint, a PIN, and so on.

The idea is to provide greater security by solving the 'stolen password' problem at the same time as making life easier for users, Garrison told iTWire.

"IT has complete flexibility of the types and number of factors used," he said.

When a phone is used, the computer can be automatically locked if it goes out of range. But don't worry that a sudden failure of the phone would leave you locked out: the policy settings would normally allow unlocking by two other factors such as a fingerprint and a PIN.

Where the computer is built around a sixth-generation vPro CPU, the policies can be contingent on whether or not it is connected to a trusted network, for example by requiring the use one factor within the company's own premises and multiple factors elsewhere.

Intel Authenticate is currently being trialled by selected companies to allow the user interactions to be fine-tuned before a general introduction later this year, Garrison told iTWire. "We've seen tremendous interest." 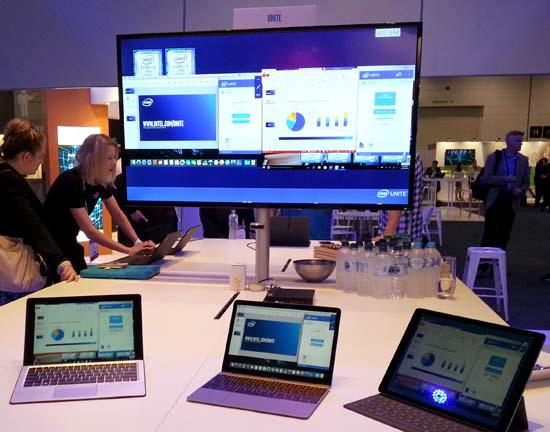 The idea is that a conference room screen or projector is driven from a (usually small form factor) PC - normally one based on a vPro CPU for remote manageability, as there wouldn't normally be a mouse and keyboard.

The screen displays a six-digit code which can be entered into the Unite software running on a Windows or OS X computer. iOS support is scheduled for the second half of the year.

Images from up to four devices can be displayed simultaneously, or eight if the room PC has two screens.

Those images are also shared with other participants' computers - whether in the room or at a remote location - allowing anyone to annotate them.

The total number of participants is limited by network capacity. Garrison said "Intel uses this in our conference rooms" and he has see as many as 50 people connected and collaborating without any issues.

Before the adoption of Unite, meetings at Intel started on average eight minutes late while people fiddled around connecting the computers to a screen or projector, or went in search of the necessary adaptor cable. Now, meetings start on average just two minutes after the hour, he said.

Intel Unite interoperates with Lync and Skype, and other companies have developed plug-ins for their products, he added.

More in this category: « Intel slashing jobs as restructure shifts focus to ‘high growth’ areas IDC, Canon caution some Aussies business could use a digital ‘reality check’ »
Share News tips for the iTWire Journalists? Your tip will be anonymous