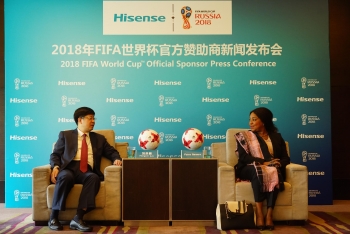 Global consumer electronics company Hisense, the parent company of Hisense Australia, has been named as the official television sponsor of the 2018 FIFA World Cup in Russia.

The sponsorship will also see the Chinese-owned Hisense engage in a number of global marketing and advertising activities for the upcoming FIFA Confederations Cup 2017 as well as in the lead-up to the 2018 World Cup.

Hisense Australia’s head of marketing Andre Iannuzzi said the FIFA World Cup brought together “the highest levels of competition and prestige in global football, making it the perfect sports event for us to be a part of”.

“Millions of Australians tune in to the FIFA World Cup every four years, and for them to see Hisense as a key part of all that excitement is such a great opportunity for our brand, both here in Australia and across the globe.

“There is no doubt that Australia is a country that loves soccer, with the previous tournament matches reaching millions of homes and Australia accounting for 71% of all of the Oceania region audience.”

In addition to offering its technical expertise and products throughout the 2018 World Cup, Hisense will engage in a joint research and development initiative with FIFA aimed at further pushing the boundaries of display technology.

Hisense has sponsored major sporting events and teams including The Australian Open, 2017 Formula 1 Australian Grand Prix, the NBL and the UEFA’s Euro 2016.

According to Iannuzzi, these activities, coupled with Hisense’s innovative high-value products, have helped the brand maintain its status as the No.3 television manufacturer worldwide into 2017.

More in this category: « Majority of Allphones stores stay open under new owners No YouTube ads on channels with less than 10,000 views »
Share News tips for the iTWire Journalists? Your tip will be anonymous