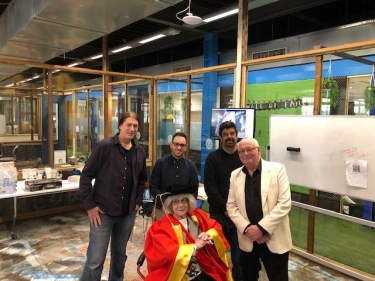 The Australian Computer Museum Society  has held its Annual General Meeting, at which the entire management committee was replaced.

New President is iTWire Associate Editor Graeme Philipson, who was founding President when the Society was formed in 1994. “I left after a few years because I thought there was too much hoarding and too little collecting,” he said. “But now there’s many enthusiastic new members and they asked me to return.”

The other new office bearers are Adrian Franulovich (Vice President), Joe Lemura (Treasurer) and Riley Perry (Secretary). Former President, distinguished IT academic Professor Jennifer Seberry, is now patron of the Society. Long-time President John Deane died in May of this year. He was one of the inventors of WiFi during his time at CSIRO and a prolific historian of early Australian computing.

Deane was one of the ‘three Johns’ who were the mainstay of the society for many years. The others are outgoing Treasurer John Geremin and outgoing Acting Secretary John Webster, both of whom declined to stand again for the management committee. “Time for new blood,” said Webster.

The new management committee has much to do. Philipson said his top priorities were to regularise the society’s finances and do a proper inventory the vast amount of equipment it has collected over the years.

“Storage of this gear has always been a major problem,” he said. “Not all of it is of historic value and it needs to be rationalised. We also need better storage space some of the hardware has deteriorated from not being well stored.

“I’m incredibly impressed with many of the new members. They are very dedicated to preserving Australia’s impressive computing heritage.. There are many different organisations and individuals with the same aims, and we look forward to working with them.”

Earlier this year Philipson, a long-time computer journalist and historian, was commissioned by the Pearcey Foundation to write a definitive history of the computer industry in Australia. In 2017 he wrote a short history of Australian computing for the Australian Computer Society, but during research for it became very aware of how much more needs to be covered.