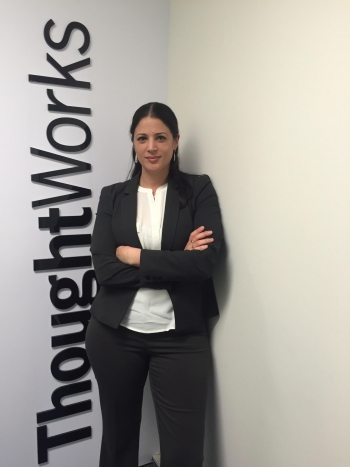 According to the Business Agility Report, Leadership is the single biggest challenge facing agile organisations today. In today’s unpredictable business environment, leaders need to develop an ability to clearly articulate the vision and create the right organisational culture to achieve it.

I got a chance to speak up with Vered Netzer, Transformation Leader at ThoughtWorks, to get her thoughts on leadership agility. From her experience as a Major in the Israeli Army, Vered shares her insights on what true leadership is, what command and control really means, and how the Army is the most agile organisation she’s ever worked for.

You were a Major in the Israeli Army. From your experience, and I’m sure everyone will have the same question, how agile is the Army?

I would say that the Army is 200% agile. The Army trains people to be ready for anything. So, when demand comes, e.g. an operation or event, you can trust that your people have the skills to figure out what needs to be done. At that point, you set the course, say what needs to happen, and let your team figure out how to get there.

In a military operation, the situation changes so fast that there is no point in planning. There is no plan A, B or C. It doesn’t work like that. Whatever you plan for the reality will be completely different. We invest a lot in teaching people how to accept reality and adapt fast.

So, I would say the Army is 200% Agile; that is the agile mindset, not the practices.

When people think military, they think “chain of command” or “command and control”. In your talk, you’re going to suggest that command and control means something different to what we assume it means in the private sector. Can you elaborate on that?

The Army is not command and control at all. The Army is about command and accountability. Commanders are accountable for an outcome and need to do whatever they can to achieve that outcome. They do not control how it is produced. I think the civilian life is much more controlling in that way. When I coach agile leaders, I see that they are very descriptive about how things need to be done. I keep telling them to let go, step back and let your team figure it out.

I like that phrase. I think more organisations need to learn about that. When did you first come across Agile practices like Scrum or Kanban?

I spent many years in the start-up scene in Israel and never saw it there. I was really surprised to only discover it when I came to Australia. I’ve led 7 different start-ups here in Australia and it’s only when my project managers came to me and said, “how about we do it in an agile way”. My response was, “I don’t care how you do it as long as you do it”. I was going ahead with my Israeli approach of ‘it’s all about the outcome’.

The methodology and how they went about executing it was only introduced to me here. These days, I think it’s quite common even in Israel.

As a coach, how would compare the adoption of an agile mindset in the corporate world vs the Army?

I think the corporate sector is too much in the details. They are trying to predict everything in advance. As part of my role, I’m trying to give them the right framework to be able to adjust and understand demands as they come while being able to prioritise better. I think that’s why the Army experience gives me lots of advantage here. The Army is like a start-up, you have limited resources and must adapt fast when the reality changes. You can’t have a yearly plan and stick to it.

When I’m consulting I’m focusing on having the right framework for that agility. If you understand how the framework works, the content that flows through it is irrelevant. Teaching the mindset is more important than teaching the methodology.

What do you see is the role of leaders?

Most of my talk is about that. I’m giving an example of how an Army operation works. I’m focusing on the leadership attribute that you can learn from the Army and bringing it into civilian life. I see there are two things that a leader must do; set the course and focus on having the right culture.

That what they do in the Army. The commander says you need to arrest this suspect. Then they step back and let the team figure out how. What the commander does at that point is making sure the team can get along, that they have the right culture, and that they can listen and learn from each other. If he’s focusing on having the right culture, then the teams are smart enough to figure out how to gets it done and how to improve going forward?

How does a leader deal with failure? In your example (arrest this suspect) it doesn’t go as planned, the suspect gets away, and team members are injured. What’s the role of the leader in that failure? And, in the corporate world, how should a corporate leader react in a similar situation?

There is no failure. The only failure that will happen is if you don’t learn from your experience. You need to understand what happened, what led to the outcome and then you need to address that. It’s about reflecting and learning from the mistakes that were made and putting the right measures in place to avoid it in the future. So, you’ll be better prepared next time. It’s about figuring out how you can still achieve the outcome, even if that operation ended.

In Agile we call this the retrospective. In the Army, and I’ll talk about this in my talk, we have two kinds of debrief after an operation. A quick one that happens immediately after you leave the area. And a longer, cross-team debrief to bring in the learning, collaboration and sharing, so everyone gets better next time.

What’s one key takeaway that someone will learn from your talk, ‘Agile leadership - why the army is the most agile organisations I've ever been in’ at the Business Agility conference in Sydney?

They will learn how to truly empower teams and how to build a trusting culture to foster proper agility and creativity.

With a vast military background and experience (7 years – rank Major), Vered is a true feminist experienced in pushing through in male-dominated industries like the Army and the Technology space. More recently she is experienced in software application development, executive coaching and portfolio management. She is speaking at the Business Agility Conference in Sydney on September 24-25 on ‘Agile leadership - why the army is the most agile organisations I've ever been in’. Get your ticket to hear Vered speak here: https://businessagility.yowconference.com.au

More in this category: « Petition to give Assange refuge to be presented to NZ Parliament Paul Lewis, Bankwest on leadership and agile transformation programs »
Share News tips for the iTWire Journalists? Your tip will be anonymous