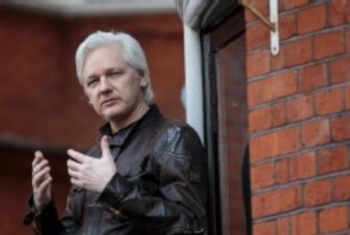 WikiLeaks publisher Julian Assange has been arrested by the British police after Ecuador withdrew his asylum on Thursday.

Assange has spent almost seven years in the Ecuadorian embassy in London after taking refuge there in June 2012.

URGENT: Ecuador has illigally terminated Assange political asylum in violation of international law. He was arrested by the British police inside the Ecuadorian embassy minutes ago.https://t.co/6Ukjh2rMKD

London Mayor Sadiq Khan said in a tweet that he could confirm that Assange was now in custody and "rightly facing justice in the UK".

The London Metropolitan police said in a statement that the Ecuador Government had withdrawn asylum for Assange, and that its officers had been invited into the embassy by the ambassador.

"Julian Assange, 47, (03.07.71) has today, Thursday 11 April, been arrested by officers from the Metropolitan Police Service at the Embassy of Ecuador, Hans Crescent, SW1 on a warrant issued by Westminster Magistrates' Court on 29 June 2012, for failing to surrender to the court," the statement said.

"He has been taken into custody at a central London police station where he will remain, before being presented before Westminster Magistrates' Court as soon as is possible.

"The MPS had a duty to execute the warrant, on behalf of Westminster Magistrates' Court, and was invited into the embassy by the Ambassador, following the Ecuadorian government's withdrawal of asylum."

Nearly 7yrs after entering the Ecuadorean Embassy, I can confirm Julian Assange is now in police custody and rightly facing justice in the UK. I would like to thank Ecuador for its cooperation & @metpoliceuk for its professionalism. No one is above the law

British Foreign Minister Sir Alan Duncan said in a statement: "It is absolutely right that Assange will face justice in the proper way in the UK. It is for the courts to decide what happens next.

"We are very grateful to the government of Ecuador under President [Lenin] Moreno for the action they have taken.

Julian Assange did not "walk out of the embassy". The Ecuadorian ambassador invited British police into the embassy and he was immediately arrested.

"Today’s events follow extensive dialogue between our two countries. I look forward to a strong bilateral relationship between the UK and Ecuador in the years ahead."

Assange skipped bail when he entered the embassy in 2012, but his fear has not been that he would be arrested by the London police.

Important background for journalists covering the arrest of Julian #Assange by Ecuador: the United Nations formally ruled his detention to be arbitrary, a violation of human rights. They have repeatedly issued statements calling for him to walk free--including very recently. pic.twitter.com/fr12rYdWUF

Rather, he has maintained that he fears extradition to the US where indications are that an indictment has been readied to put him behind bars.

On Wednesday, WikiLeaks editor-in-chief Kristinn Hrafnsson had told a media conference in London that Ecuador was spying on him and his meetings with lawyers and a doctor had been secretly filmed by the Ecuadorian authorities.

Hrafnsson said photos, documents and audio recordings about Assange's activities in the embassy had been sent to WikiLeaks by "Spanish individuals".

Images of Ecuador's ambassador inviting the UK's secret police into the embassy to drag a publisher of--like it or not--award-winning journalism out of the building are going to end up in the history books. Assange's critics may cheer, but this is a dark moment for press freedom. https://t.co/ys1AIdh2FP

The Assange saga began when he visited Sweden in August 2010 to attend a conference to give a talk. During that visit, he had sex with two women and they later filed rape and molestation complaints against him later, claims that he denied.

He was questioned by Swedish authorities and cleared, but did not leave the country at the time.

Interpol issued a Red Notice for his arrest on 20 November 2010. On 27 November, Assange surrendered to authorities in the UK and appeared before a Westminster judge. He was granted bail in December after his backers provided £240,000 in cash and sureties.

A legal back-and-forth eventuated and went on until June 2012, when Swedish prosecutors sought his extradition.

More in this category: « Deakin Uni investing $33 million in AI US accuses Assange of password cracking, seeks his extradition »
Share News tips for the iTWire Journalists? Your tip will be anonymous