Google chiefs were distraught after Trump won in 2016 Featured 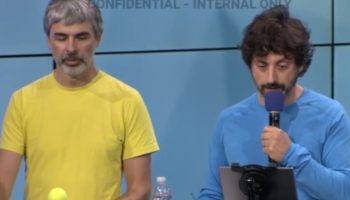 ANALYSIS An internal video from Google, made in the week that brought Donald Trump to power, shows a distracted and visibly upset set of top officials and also reveals the degree of disconnect between the top brass at the search engine company and the rest of the world.

The video, of one of the weekly meetings that are known as TGIFs — or Thank God It's Friday meetings — was published by the right-wing website Breitbart which used it to highlight exactly how much those who run Google are anti-Trump.

But, political considerations aside, the video — which is about 64 minutes — is well worth watching in full (else the context will be lost) because it provides glimpses into the thinking at Google, thinking which often has an impact on billions of people around the world.

It shows the degree of disconnect between the people who run this very powerful company and the rest of the world, and is best exemplified by the way they use hundreds of words to say precisely nothing. There was not one definite commitment that I could spot – apart from that on encryption.

When someone raised the issue of encryption and whether there would be any change in policy, one vice-president, Kent Walker, said there would be no change. You can see the question below.

That Google was a committed backer of Hillary Clinton is no secret – as iTWire  reported, Eric Schmidt, the chairman of Google's parent company Alphabet, expressed a desire in 2014 to be the "head outside adviser" to Clinton's presidential campaign. Schmidt set up a company to handle the Democrats' digital needs, so great was his involvement.

There was good reasoning behind this. During the Obama years, Google had unfettered access to the White House, and its close ties are the main reason why a proposed 2012 probe by the US Federal Trade Commission into the company's alleged unfair competition was dropped.

In the video, the top officials at Google — co-founders Larry Page and Sergey Brin, chief executive Sundar Pichai, chief financial officer Ruth Porat, and vice-presidents Eileen Naughton and Walker — were all present, with some making speeches to the assembled staff and the others joining them on stage to answer questions.

It was amusing to watch Brin, Pichai, Walker, Porat and Naughton talk about the company's so-called values. Amusing because this is the company that rapaciously slurps up personal data from anyone who uses any of its products and then sells it to the highest bidder. If any one of these worthies had just said out loud, "Our values are focused on making money any which way", one would have mentally applauded. But the self-delusion continues and the Kool-Aid continues to be drunk.

There was a revealing moment when one employee, obviously of Chinese origin, stood up and asked his bosses, what would happen if things in the US developed to the point where the government did something similar to what happened in China in 2010 — when Beijing hacked its way into Google's servers. His query was, would the reaction — Google pulled out of China shortly thereafter — be the same.

The question was met with the typical non-answer at which Pichai seems to excel. This, by the way, is the same Pichai who has negotiated a way for Google to re-enter China and host a censored search engine. Given that, watching him cope with this question was, well, interesting.

This is the same Pichai who made the claim recently that you can uninstall any application from an Android phone. The way he put it was: "If you prefer other apps — or browsers, or search engines — to the preloaded ones, you can easily disable or delete them, and choose other apps instead, including apps made by some of the 1.6 million Europeans who make a living as app developers." To call this untrue would be an understatement.

In the video, there were queries about foreign employees working in Google and how the top brass saw their future in the wake of Trump's election. Once again, there was reassurance in general terms.

The disconnect between real-world events and the views of these Google officials was most evident when someone asked about H-1B visas and whether any change could be anticipated. Nearly two years on from the date Trump was elected, it is evident that there has been major change. Yet, in this video — which is possibly from a meeting held on 11 November 2016, the first Friday after Trump won the election — the view expressed was that there was unlikely to be any major change as Trump was a businessman (a statement made by Naughton which evoked some laughter) and wanted to help businesses in the US prosper. Yeah, sure.

Many people call Apple a cult. That description could be extended to Google as well if one were to watch this video: despite meaningless replies from the top brass, every single reply evoked applause. It was something like watching a session of the Chinese Communist Party where every sentence uttered by the president leads to spontaneous (?) applause. The same thing happens at State of the Union speeches in the US.

For the first time (for me, at least), there was some footage of Page speaking in public. After watching him struggle to articulate his thoughts in what can only be described as a tone that is difficult to comprehend, one can well understand why he is reluctant to appear at public forums. If my memory serves me right, the last time he made a public appearance was to testify at one of the many sittings of the Oracle-Google trial over the use of Java APIs in the Android mobile operating system.

Google is often lauded for allowing employees to dissent and offer opinions that do not align with those at the top. That may well be true, but in this video, both the chiefs and the Indians were singing from the same song-sheet.