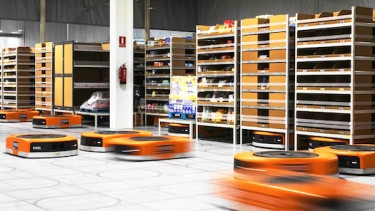 Amazon Australia says its robotic fulfilment centre in Western Sydney - the first in the Southern Hemisphere - is on track for completion by the end of the year.

The warehouse is located at Goodman and Brickworks' Oakdale West industrial estate and will be the largest warehouse ever built in Australia. It covers a vast 200,000 square metres over four levels and is the size of 24 rugby fields. If that’s hard to imagine, consider that it uses more steel than the Sydney Olympic stadium, and takes more space than Taronga Zoo.

Amazon’s announcement about the warehouse being on track comes as the building shell nears completion. To date over 1,400 people have contributed to the massive building and another 300 will join to fit out the interior including the robotics and conveyor mechanisms.

The steel frame uses 13,500 tonnes of steel and will ultimately be capable of holding 11 million items and will be staffed by more than 1,500 workers.

A key part of the fulfilment centre's design will be robotics throughout, which will save space - allowing for more product storage - and will increase efficiency by moving pods of inventory to the human picker and packers. Amazon states it will be able to sort 25,000 items per hour.

The new warehouse will be Amazon's fifth fulfilment centre in Australia, its second in Western Sydney, and its only robotic centre in the entire Southern Hemisphere. Amazon states this centre doubles its operational footprint in Australia and further increases the range of selection and speed of delivery that Australian customers can enjoy when shopping on the site.

Meanwhile, Amazon is also currently constructing a second distribution centre in Melbourne. That centre is a more reserved affair coming in at a smaller 37,000 square metres - which is still double that of the Melbourne Cricket Ground despite being only one-fifth of the gargantuan new robotics facility.

Here's what it's like to work with a robot at an Amazon fulfilment centre: