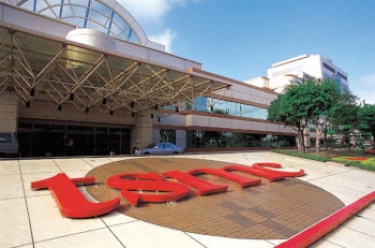 Beam-raising refers to the placing of the last beam of a building and generally signifies that construction has been more or less completed.

A report in Taiwan News said TSMC executive chairman Mark Liu had described the plant as the most advanced in the world, adding that it would help the company stay ahead of all its competitors in the chip business.

At the moment, TSMC and Samsung are the only two companies that can manufacture 5nm processors, which are used in the latest smartphones.

The factory is about the size of 22 football fields and is expected to begin production in the second half of 2022.

Liu said 600,000 12-inch wafers would be pumped out every month once the fab reached full production.

TSMC has increasingly figured in the news following the American imposition of sanctions on Chinese telecommunications equipment vendor Huawei Technologies.

Most of Huawei's chips were being made by TSMC, based on its own designs, but that has stopped from 15 September due to the US restrictions.

The Southern Taiwan Science Park has about 15,000 workers and the number if expected to rise to 20,000 once the fab is operational.

In May, TSMC announced that it would be setting up a factory in Arizona at a cost upwards of US$10 billion (A$13.6 billion).

More in this category: « Any Taiwan move by China would hit US tech sector hard: report Australian manufacturers say reshoring by 2023 is likely due to market volatility, according to PROS survey »
Share News tips for the iTWire Journalists? Your tip will be anonymous