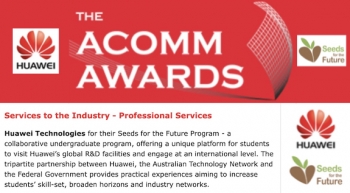 Huawei's impressive "Seeds for the Future" program has won the prestigious ACOMMS "Services to Industry – Professional Services" Award in what is definitely a deserved win.

Despite Huawei having issues selling its flagship smartphones in the US, and having been banned from Australia's 5G network, in what has been seen by some as political expediency in the midst of federal leadership turmoil, as covered in iTWire last month, the Chinese tech giant keeps ticking along.

Huawei's Mate 20 smartphone is due to be launched in October, as revealed by Huawei's chief executive at IFA 2018, presumably set to be powered by the newly launched Kirin 980 processor, taking the fight right up to Apple, Qualcomm, Samsung and everyone else.

Now comes Huawei's latest award, for its global Corporate Social Program, or at least one aspect of it, known as "Seeds for the Future".

For those who haven't heard of it, what is the program?

Well, Seeds for the Future is described by Huawei as "a collaborative undergraduate program offering a unique opportunity for Australia’s best and brightest information and technology students to train at Huawei’s global R&D facilities in China".

I have no idea whether I'll be invited again to cover this event in 2018, but if so, you'll see an article very similar to the two above, with video interviews of the Australian students, university staff, executives and a video of the graduation ceremony, and if not, hopefully another journalist from whichever Australian tech publication will do something similar.

Thus, having played a tiny part in seeing this program at work over the past couple of years from a media point of view, it's great to see Huawei achieving a win for this very program with its 2018 ACOMMS Award win, with the ACOMMS being part of the Communications Alliance.

Huawei Manager Corporate Relations and Programs, Lisa Connors, said it was an honour for Huawei to be recognised for the work it was doing in Australia.

Connors added: “Nurturing Australia’s emerging IT talent is vital to drive the next generation of digital innovation.

“Huawei is one of the world’s R&D powerhouses and the Seeds for the Future students gain access to our leading engineers and training facilities.”

Hindmarsh added: “The award recognises a student industry experience that provides hands-on-learning and vital transferable skills at one of the world’s largest telecommunications companies.

“This program and our partnership with the New Colombo Plan has provided our students with real-world and practical experience working in China.”

Conducted by Communications Alliance and now in its 12th year, the ACOMMS Awards recognise excellence in the wider communications industry.

Communications Alliance reminds us that it is "the most influential association in Australian communications, co-operatively initiating programs for industry development, innovation and growth", and that "the awards were judged by a panel of senior Australia telecommunications executives".

Huawei's Seeds for the Future video from 2017, showing a trailer of the student's experiences from their point of view in four minutes and 28 seconds is below. You can see my interviews with the 2016 and 2017 set of students at my articles linked above.