FULL VIDEOS: 30iGala successfully celebrated the 30th Anniversary of the Internet in Australia 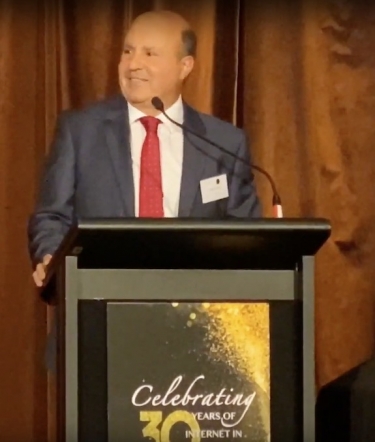 With nearly 400 people in attendance, the 30th Anniversary of the Internet in Australia was a sold out event, featuring excellent speeches, a fascinating panel discussion, quantum supremacy, great prizes and more!

Peter Coroneos, the former CEO and founder of the Internet Industry Association, and organiser of the 30th Anniversary of the Internet in Australia Gala Dinner, will be writing an official "thank you" article that we'll publish later today.

However, the videos of the event are now available to watch in full, in much better audio and video quality than the live stream of the event to YouTube, and are embedded below as four separate videos.

iTWire recorded a range of short video interviews with some of the attendees on Thursday night, asking about their first memory of the Internet, and we'll publish those in a subsequent article later this week.

There was also a separate photographer and videographer who was able to capture more fantastic photos and video interviews, and again, we will publish these as well.

As one of the official media partners of the event, it was a great pleasure to not only attend the event and take part in the final part of the event at the impressive Doltone House location, where Peter invited me on stage give away some great prizes thanks to a fantastic quantum random number generator that provided a truly random drawing, thanks to Andreas Baumhof, Vice President of Quantum at Quintessence Labs, but also to see a range of familiar faces, catch up with old friends and to feel and contribute to the energy and excitement in the room all night!

Peter did an incredible job in organising the event and making it a tremendous success, garnering support across the IT and telecommunications industries, organisations and associations, through to both sides of government, with a who's who of speakers, sponsors and attendees, and you'll be able to see it all for yourself in the event videos below.

Special thanks must also go to prize sponsors, and while Peter will have more details on who they were, I want to thank Andy Yang, MD of realme Australia, who provided two flagship realme XT smartphones, valued at $499 each, featuring Australia's first 64 megapixel camera within an impressive quad-camera configuration, and who was also in attendance on the night.

realme launched just three weeks ago in Australia, with full details of all its new models able to be seen in the full launch video I was able to record at that launch event.

So, without further ado, here are four videos from the 30th Anniversary of the Internet in Australia Gala Dinner!

30iGala - Celebrating 30 years of the Internet in Australia Video 1 of 4, featuring an introduction by event organiser Peter Coroneos, followed by a speech from Australia's Federal Minister for Communications, Paul Fletcher, and a vote of thanks to the Minister by David Spence, Director and Chairman of PayPal Australia and the National Narrowband Network company.

2. 30iGala - Celebrating 30 years of the Internet in Australia Video 2 of 4, featuring a panel discussion:

30iGala - Celebrating 30 years of the Internet in Australia Video 2 of 4, featuring a panel discussion with:

30iGala - Celebrating 30 years of the Internet in Australia Video 3 of 4, featuring a speech by Michele Levine, CEO at Roy Morgan, on behalf of Responsible Technology Australia.

30iGala, 4 of 4 with Andreas Baumhof, VP Quantum at Quintessence Labs - Quantum Random Prize Draw with Andreas Baumhof, the VP of Quantum at Quintessence Labs, used his technology to deliver a truly random prize draw with quantum random number generation, featuring a range of excellent prizes, including two flagship realme XT 64-megapixel Quad-Camera smartphones, delivered by Peter Coroneos and aided by Alex Zaharov-Reutt, who was also the test subject for a new type of brainwave protection as you'll see in the video above!

More in this category: « 30iGala, the 30th Anniversary of the Internet in Australia event on tonight 30iGala: A Huge Thank You! »
Share News tips for the iTWire Journalists? Your tip will be anonymous