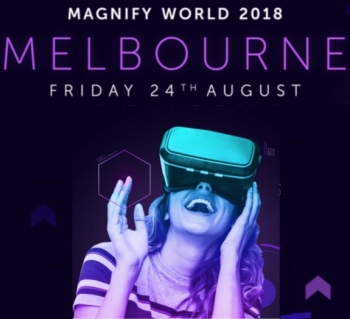 On August 24 and 25 in Melbourne, Dr Barry Sandrew will be keynote speaker at the "Magnify World Expo" event, which will showcase what are claimed to be stunning, world-class VR, AR, IoT experiences and more, with the video below a fantastic preview on what he'll talk about.

The Magnify World Expo "showcases world-class Virtual Reality and Augmented Reality experiences" and is billed as "one of the largest global roadshows in the world covering Australasia, China and North America".

The event will be held over two days at the Melbourne Convention and Exhibition Centre.

The first day is "a business summit which showcases a combination of international and local speakers covering a series of industry sectors such as film and television, advertising and branding, gaming, technology, artificial intelligence and investment", while the second day is "open to the public offering opportunities to experience never seen before AR/VR technologies from an array of local and global fortune 500 companies".

In preparation for this event, members of the media were extended an invitation to hear from one of the world’s leading experts on digital technology in the film and television industry.

That expert is Dr Sandrew, who joined us via video conference from the US to "provide some insight ahead of his keynote at Magnify World Expo in Melbourne on 24 August".

From Harvard/MGH neuroscientist to internationally recognised serial entrepreneur, digital imaging expert and visual effects pioneer, Dr Sandrew has over 33 patents and decades of feature film and TV accomplishments, including productions for all the major Hollywood studios, TV networks & several cable networks. He is the founder of two production studios that became gold standards for colour VFX. In 2000, he established the first and longest operating VFX studio in India.

The media briefing was hosted by Matt Coleman, head of Innovation at Magnify World who provided some insight into the leading trends in AR/VR ahead of the conference.

To get just a taste of Dr Sandrew's upcoming keynote, you can watch the video of his presentation to the media in full below. As you can see after the video, the brief wrap of Dr Sandrew's is incredibly impressive, and he is clearly a world-class speaker, innovator, inventor and drawcard for the Magnify World Expo event later this month.

Here is the video of Dr Sandrew's presentation to the media:

In 1987 Dr Sandrew invented digital colourisation. Between 1987-1993, he colourised over 250 films, 180 TV episodes and 70 cartoons. He also produced all colour, compositing and VFX for Stephen Spielberg's first digital animated feature, We're Back, A Dinosaur Story, Gahan Wilson's animated classic, The Diner, the Fox TV series, Attack of the Killer Tomatoes, as well as VFX for the ABC miniseries, War and Remembrance and the John Lennon documentary, Imagine.

In 2007, Dr Sandrew invented a process for converting 2D films to 3D, changing the company name to Legend3D. Beginning in 2010, he oversaw creative and technical teams in the 3D conversion of Alice In Wonderland, the Shrek Trilogy, Transformers and many more tent-pole films at the height of the 3D phenomenon. In subsequent years, the teams Dr Sandrew led have worked on the 3D conversion and VFX of more than 50 of the highest grossing 3D feature films of the past seven years.