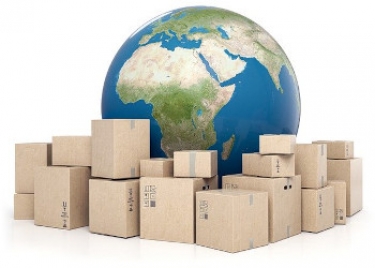 Close on the heels of technology analyst firms IDC and Gartner releasing figures on the global shipments of traditional PCs in the second quarter of 2020, analyst firm Canalys has published its figures, which closely approximate the numbers published by the other two companies.

Canalys said the rebound in the quarter more than made up for any drop in the first quarter of the year, with shipments for the first six months now being 1% more than the corresponding period in 2019.

It said the rebound was mainly driven by notebooks which were being snapped up by businesses, students and consumers who were all adjusting to working from home. Correlating with this, shipments of notebooks and mobile workstations increased by 24% year-on-year while desktop shipments fell by 26%. 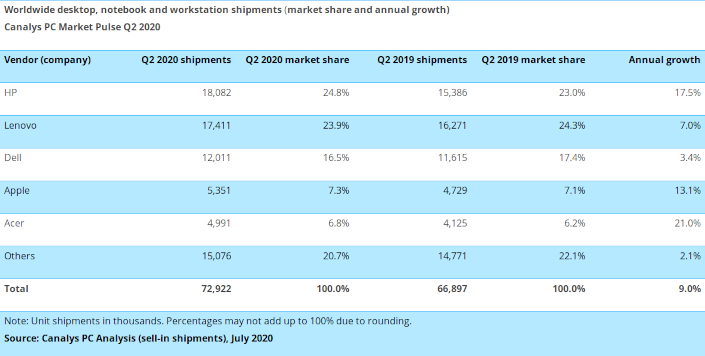 Among the companies benefitting from this increase were HP which unseated Lenovo, shipping 18.1 million client PCs, an increase of 18% over the corresponding quarter in 2019, mainly in the US and the EMEA region. Lenovo (17.4 million units and 7% growth) and Dell (12.0 million units and 3% growth) took the second and third spots respectively.

Apple and Acer completed the top five, with growth of 13% and 21% respectively.

Canalys research director Rushabh Doshi commented: “Notebooks have singlehandedly pulled the PC market out of depression. They have been crucial in ensuring that the service, government and education sectors can continue to function in the face of unprecedented disruption and uncertainty.

"Vendors and the channel made the necessary changes to ramp up production and delivery of notebooks to the highest level in years.”

Canalys said it expected the importance of notebooks to grow as the PC ecosystem invested in the category. 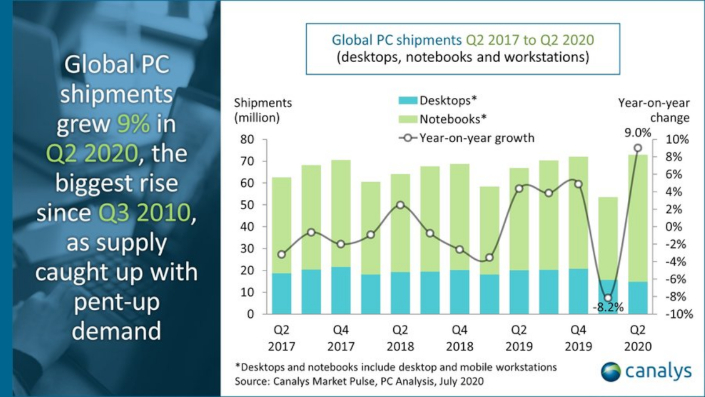 “The extraordinary demand has driven shifts in strategy across the industry. Chrome OS and AMD are making inroads into the commercial sector, while Apple MacBooks will soon run on ARM chips,” added Doshi. “After years of smartphone-centred innovation, application developers, too, are turning their attention to the PC, where productivity and performance take precedence.”

Canalys analyst Ishan Dutt looked at the figures from a regional perspective and said North America and the EMEA region had grown the most in the second quarter with shipments rising by 11% and 25% respectively.

“These markets were well equipped to handle large transitions to remote work and learning, and will see these trends extend beyond the end of the COVID-19 pandemic," he added. 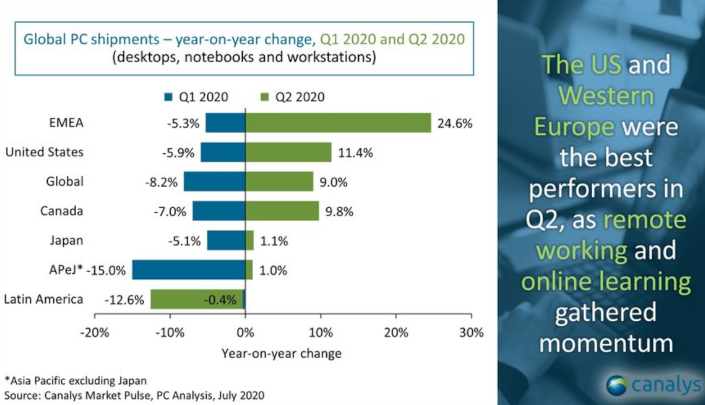 "Additionally, the easing of lockdown restrictions led to a bump in employment and business activity in Q2. The extent of the PC market rebound in Q2 in these regions means shipments in the first half of 2020 were higher than they were at the same point last year.

"Conversely, Latin America, which has suffered a worsening situation, saw shipments fall 13% year-on-year. PC market recovery in the region will be delayed as businesses and price-sensitive consumers prioritise other spending during the economic downturn.

"Local manufacturing and distribution also face prolonged disruption as lockdown measures ramp up. In Asia Pacific, the Q2 shipment bump was not large enough to counter the shortfall in Q1. Greater barriers to implementing working and learning from home, and the mobile-first culture in parts of the region meant notebook demand did not see a huge spike in growth.”