3D simulations to hit the factory floor with CSIRO development 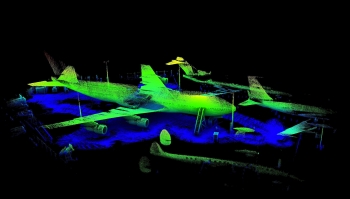 The manufacturing industry may be going through a tough time but manufacturers will soon be able to create faster and more accurate 3D simulations of their factory production lines, with new developments in conjunction with CSIRO.

Licensed to GeoSLAM, Zebedee, also known as ZEB1, is described as world’s leading handheld 3D laser mapping technology and is used by more than 25 multinational organisations for efficiency and productivity gains.

“We’re investing in developing this technology so that GeoSLAM, the leading player in the field, will continue to grow and enter new markets,” said the CSIRO Digital Productivity Flagship’s Nick Marsh.

“GeoSLAM is a true start-up success story. It was established in 2012 as a joint venture between CSIRO and 3D Laser Mapping to commercialise our technology, and has since achieved major worldwide sales and recognition,” Marsh said.

Zebedee, a system enabling users to create accurate 3D maps by walking through a desired location, which will be the focus of a keynote address by CSIRO’s Digital Productivity Flagship Director Dr Michael Brünig this week at RoboBusiness 2014 in Boston, United States.

“There’s real value for companies in mapping dynamic environments in real-time. For example, manufacturers can use the technology to map components on a production line and track their progress to improve efficiencies and flow,” said Dr Brünig.

“There’s also the opportunity to use these technologies to create real-to-life simulations of the factory floor for training and quality control activities.” The AGP funding was awarded to GeoSLAM through a competitive process, in recognition of the company’s rapid early success and the potential to advance the technology through CSIRO – which has Australia’s largest field robotics research centre.

“The technology was first applied to the mining industry but it’s now being used in a whole host of areas, from security and forestry to mapping cultural heritage sites,” Marsh said.

“It has mapped some of the world’s most iconic landmarks, including the Leaning Tower of Pisa, as well as national treasures like the Jenolan Caves near the Blue Mountains and Fort Lytton in Brisbane.

“Key to securing GeoSLAM’s competitive advantage, this development will take the technology to the next level through new and improved features and broadening its applications.”

An animation highlighting the Guardian Technologies suite and how they can assist manufacturers through improved safety and productivity can be viewed at: https://www.csiro.au/guardian.