Trial of Samsung heir set to start this week Featured 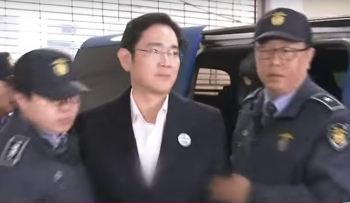 The trial of Samsung's heir Lee Jae-yong on alleged bribery and embezzlement charges will begin on Thursday.

The deputy chairman of Samsung Electronics, who was arrested on 17 February, will deny all charges that he gave bribes to South Korean President Park Geun-hye and a close friend in exchange for business favours, company sources told Yonhap on Sunday.

A special investigating team, that is looking into the allegations against Lee, suspects that he either handed over or promised to give 43.3 billion won (US$38.3 million) to Park's friend, Choi Soon-il, provided there was government backing for two Samsung affiliates to merge in 2015.

This merger has been said to be critical for transfer of the Samsung leadership from Samsung Electronics chairman Lee Kun-hee to Lee Jae-yong, who is his only son.

Lee has already claimed, during questioning, that he was pressured by the presidential office to agree to donate money to Choi and her daughter.

The Samsung heir is also accused of donating money to help the Federation of Korean Industries create two non-profits which were under Choi's control. He has denied this charge.

The company sources also told Yonhap that Lee had told his interrogators that the 2015 merger had no connection to these donations and was done as per existing regulations through the National Pension Service, a major shareholder which backed the merger.

Lee has also denied that Samsung received favours from the Fair Trade Commission in the process. The probe team suspects that the FTC was forced by Park to change guidelines so Samsung could effect the merger.

A Samsung official told Yonhap:  "All charges will be cleared up at court."

The scandal and its fallout comes after a year in which Samsung had to stop production of its flagship Galaxy Note7 after numerous devices combusted. Samsung also faced issues with washing machines and had to order a recall.

As a result of safety measures introduced after the Note7 fiasco, Samsung did not announce its new flagship, the Galaxy S8, at the Mobile World Congress which was held in Barcelona last week. In the past such models have been unveiled at this event. The announcement is said to be delayed until 29 March.

More in this category: « Samsung heir awaits fate in khaki jumpsuit Dragontail serves up first Australia customer with pizza company contract »
Share News tips for the iTWire Journalists? Your tip will be anonymous