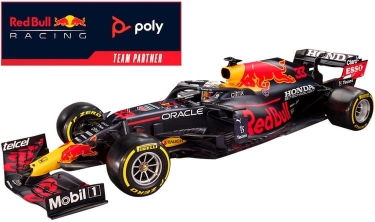 "We are thrilled to partner with Red Bull Racing as they build on their success from last season. This partnership unites two global organisations focused on performance and innovation," said Poly ANZ managing director Andy Hurt.

"As the 2022 season kicks off, Red Bull Racing will rely on Poly's premium audio and video technology to ensure every word and gesture is captured with precision and clarity, delivering a reliable collaboration experience in support of their business, from any location in the world."

There are plans to use more Poly products in areas including business support, design, meeting rooms and in the new Red Bull Powertrains facility.

"A World Championship winning Formula One Team is made up of hundreds of people working in unison, though they are often separated by thousands of miles," said Red Bull Racing team principal and CEO Christian Horner.

"As such, it's vitally important that we have clear lines of communication in every area of the business, bringing our entire team together, no matter where they are in the world. Poly's category defining suite of audio, voice and video solutions will help us to find the competitive edge we need to win."