Microsoft acquires Activision Blizzard for $US 70b Featured 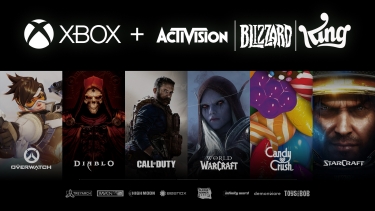 Microsoft made big news when it bought Minecraft and when it bought Bethesda, but today’s news is a deal 10 times that. Microsoft has now announced its acquisition of Activision Blizzard for an eye-watering $US 70 billion. It makes Microsoft the world’s third-largest gaming company.

Microsoft bought Mojang Studios, creator of Minecraft, in 2014 for $US 2.5b. Last year, it bought Zenimax Bethesda for $US 7.5b.

Activision began life in 1979 providing games and has been part of computer gaming history for as long there have been home computers. Early Activision success includes Pitfall while its recent history is best known for the Call of Duty franchise.

Activision itself acquired Blizzard Entertainment in 2008 for $US 18.9b, making it the owner of Warcraft, Starcraft, and World of Warcraft - the latter still drawing in millions of monthly subscriber fees as the most successful MMORPG of all time.

That mantle has passed; it's now Microsoft who owns the lot - Minecraft, Call of Duty, Warcraft - along with Halo, Xbox, and the rest of the Microsoft stable.

Sentiment from analysts and consumers are divided by the news; for some, they see the concentration of so many major titles under one umbrella as an anti-competition concern, while others note Activision Blizzard has been rocked with scandals relating to a culture of abuse coming from no less than the top, Activision CEO Bobby Kotick, himself, and recognise Microsoft’s potential to bring about change.

Microsoft's acquisition of GitHub was similarly met with concern by segments of the open-source community who were not persuaded Microsoft would act in the best interests of that community. However, Microsoft did not shut down open source and has instead released rich new functionality for GitHub users whether free or paid.

With the benefit of hindsight, the future for the most beloved Activision Blizzard titles is positive and, in fact, it may be excellent news for gamers with the potential for Microsoft GamePass subscribers to receive a whole new catalogue.

What specifically the future holds right now is speculation, but Microsoft has stated its goals to open up gaming to people of all backgrounds and experiences, on a wider range of devices.

Perhaps we may even see World of Warcraft's subscription brought under GamePass, or - who knows - amazing new titles like Age of Warcraft, an RTS-style Age of Empires game using the Warcraft lore and characters. Or, a Minecraft theme for Starcraft. The possibilities are there.