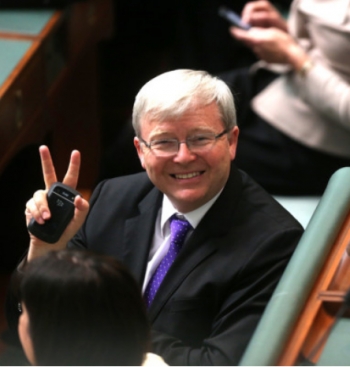 Prime Minister Kevin Rudd and Opposition Leader Tony Abbott have accepted a debate to be hosted by Yahoo!7, Seven News and Facebook, as the companies announced a new partnership today.

The PM posted a status update today announcing "The Prime Minister has agreed that the first debate of the election will be hosted by Facebook and Channel 7. LIKE if you want to see FACEBOOK host the first election debate," calling for users to support what would be one of the world's first debates powered by social media.

UPDATE: Tony Abbott has also accepted the invitation, posting "I look forward to debating Kevin Rudd this Sunday at the National Press Club, including taking questions from social media from people across Australia."

The move comes as Yahoo!7, Seven News and Facebook announced a collaboration that will see shared election coverage between them, allowing users to share their opinions and be part of the election, widely seen to be the most important in recent years, as never before.

As part of the deal they have extended invitations to the political leaders to participate in a debate where questions would be taken from Facebook users, and the event would be streamed live on Facebook as well as on television.

Facebook's Head of Communications Mia Garlick told iTWire the partnership was part of Facebook extending the everyday conversations of Australians around the country.

"Politics has always been social, we've been engaged in conversations with our family and friends for years, so Facebook is really just an evolution and extension of that," she said.

"We're aiming to provide representative insights into what Australian voters are thinking, and what their opinions are in the leadup to the 2013 election."

Facebook's election content will also complement Seven News election coverage through aggregated insights on what Australians are thinking and saying about the election, pitting coverage from Seven News journalists alongside election trends occurring on Facebook, as well as polls conducted through the social media site.

Another development is the Facebook data dashboard, according to the companies the results garnered from the dashboard will be used to generate a series of visual insights which will be incorporated in election updates across Seven News reports and the Yahoo!7 network.

Director of Product at Yahoo!7 Harry Burt told iTWire that 12 million Aussies will be reached across Yahoo!7 and Facebook, and that the data collected would therefore be highly representative, in contrast to phone polls for example.

"What we're trying to do is reverse the cycle that news is traditionally published through traditional means like newspapers and things, but we're turning things around. Users will be driving the broadcasts, and driving the news coverage."

More in this category: « BigAir acquires IIPC for $20 million Adelaide's free WiFi set to double »
Share News tips for the iTWire Journalists? Your tip will be anonymous