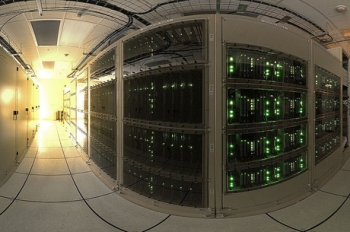 The Australian Research Council-funded FlashLite was installed in Queensland’s Polaris Data Centre in August last year. FlashLite set a record CFP2006 Rate result of 33,000, and CINT2006 Rate result of 40,200, beating previous top position SGI UV systems by as much as 29 per cent.

FlashLite also reached a STREAM Triad benchmark result of 6,367 GB/s, taking the number three position on the STREAM Top 20 list, trailing only two systems which have double the processor count.

FlashLite, installed by XENON Systems, was configured as an SMP of 128 processors having 1,536 cores and 16 TB RAM, powered by ScaleMP’s vSMP Foundation and running Linux 64bit (CentOS 6.5).

“We are extremely satisfied to have set two world records,” said Prof. David Abramson, Research Computing Centre Director. “These benchmarks measure the computational power and the speed of accessing memory respectively. FlashLite was designed for data-intensive science, but it’s great to see it achieving outstanding computational performance at the same time. This makes it ideal for demanding Big Data problems such as those found in Life Sciences, Physics, Chemistry, Geo-Science and even Social Science.”

Shai Fultheim, ScaleMP’s CEO and founder, said, “With the FlashLite system, the University has proven that one can indeed use commodity components to create the world’s fastest shared memory computer, and we look forward to further collaboration with Queensland scientists in varying fields of research, to help them get the most out of their modeling, simulation, and analysis of the universe we live in.”

“These fantastic world records confirm the capabilities of this machine, and XENON’s integration of vSMP Foundation makes it easy to partition and reconfigure the system as needed by the researchers,” said Dragan Dimitrovici, founder and CEO of XENON Systems.

FlashLite has been designed to support data intensive applications, which are neither well served by traditional supercomputers nor by modern cloud-based data centres. Conventional supercomputers maximise Floating Point Operations per Second (FLOPS) and inter-processor communication rates through high bandwidth and low latency networks. Conversely, modern cloud systems minimise the cost of ownership through reliance on virtual machines and shared storage; they thus utilise relatively slow processors and networks and, by and large, do not support parallel processing.

FlashLite is a multi-node cluster being purchased from XENON Systems that is comprised of the following sub-systems:

FlashLite has been funded by the Australian Research Council, in conjunction with the following stakeholders:

SPEC benchmarks were executed by ScaleMP, Inc., between 12–14 January 2016. Comparisons are according to the Standard Performance Evaluation Corporation’s CPU 2006 benchmark results, published by SPEC on 17 February 2016.

More in this category: « AppDynamics secures growth funding Oracle opens up M7's DAX 'SQL in Silicon' capability »
Share News tips for the iTWire Journalists? Your tip will be anonymous