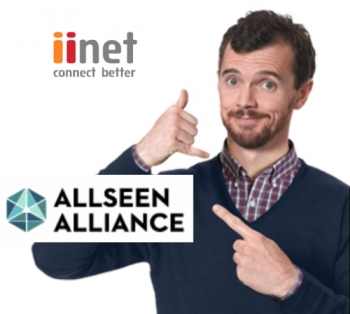 iiNet sees itself helping influence the customer experience and an increasingly connected, IoT-enabled world, and is the first Australian ISP to join.

iiNet has joined the AllSeen Alliance in a move that is clearly far deeper that just being seen to be seen.

But what is the AllSeen Alliance, I hear you asking?

The alliance boasts it is the ‘leading Internet of Things initiative’ with over 100 members, and is the broadest, cross-industry ‘nonprofit consortium dedicated to enabling and driving the widespread adoption of products, systems and services that support the Internet of Everything with an open, universal development framework supported by a vibrant ecosystem and thriving technical community.’

The alliance also explains that: ‘The Internet of Everything is based on the idea that devices, objects and systems can be connected in simple, transparent ways to enable seamless sharing of information across all of them.

‘As no single company can accomplish the level of interoperability required to support the Internet of Everything and address everyday, real-life scenarios, a cross-industry effort is needed to deliver new experiences to consumers and businesses.’

In addition, the alliance points to Gartner’s prediction that IoT ‘will add $1.9 trillion to the global economy by 2020, to include more functionality and interactions across various brands and sectors, such as the connected home, healthcare, education, automotive and enterprise.’

So, with that very serious sounding introduction to the alliance and its IoT-led dreams of global supremacy, we get to iiNet and its decision to join the rebel alliance and defeat the Empire.

Actually, I got a bit carried away there with thoughts of Star Wars, but perhaps Apple is the Empire that the AllSeen Alliance is banding together against, as it isn’t a member - but then, neither is Google.

That said, Microsoft did join the alliance last year soon after Apple announced its new HomeKit standard, so it’s clear a giant Internet of Things battle is underway, and as with all wars, it’s impossible for all sides to be winners.

In any case, iiNet has joined the AllSeen Alliance, and is the first Australian ISP to do so.

The company hopes it can help ‘play a role in influencing the customer experience in an increasingly connected world’.

Its GM of Corporate Strategy, Brett Hutchison, noted iiNet’s new members further demonstrated its ‘commitment to innovation and customer experience’, and stated: “The Internet continues to provide a platform for innovation and we’re seeing more and more evidence of a connected future.

“We’re looking forward to collaborating with a group of like-minded companies to ensure the transition to a smart world is a positive experience for consumers.

“We’ll throw our full support behind the work of the AllSeen Alliance as we continue to keep our finger on the pulse of developments in this space.”

iiNet notes that, as a member, it will ‘have the opportunity to work alongside fellow members including Microsoft, LG, Panasonic, Sony and Sharp.’

So, we’ll have to see just how successful the AllSeen Alliance is at creating true IoT standards that won’t be crushed by Apple’s HomeKit or Google’s own plans for the Internet of galactic 'don't be evil' domination.

After all, what has been seen cannot be unseen, but whatever AllSeen is cooking up, it appears, at least for the time being, to look good.

More in this category: « Interoperability the key to industrial Internet of Things, says consortium Harvard Biz Review says Internet of Things drives measurable business outcomes »
BACK TO HOME PAGE
back to top