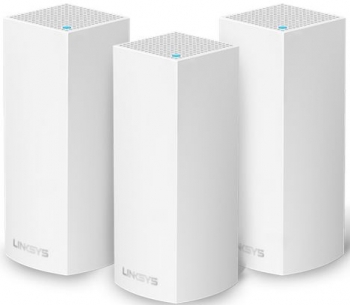 The Linksys Velop System (US Site) will reach Australia in April and removes reliance on the main router — often in a backroom cupboard or somewhere out of the way — as the main transmitter of Wi-Fi broadband around the home. In the past, the usual way to extend the router's range was by an extender that took an already weak signal and retransmitted it.

Mesh is a wireless term that allows multiple "nodes" that look more like small modern speakers but each acts as a router, range extender, access point and bridge. This mesh system ensures the best path is always selected for the fastest speeds to each device while delivering 100% speed to the edge of the home. When placed correctly using the Linksys app, the mesh system daisychains the signal over the nodes so that it is equally strong right back to the gateway.

Chet Pipkin, founder, and chief executive of Belkin International, said, “This is why I purchased Linksys (from Cisco) in 2013.  I had a vision of solving a huge problem in almost everyone’s life - slow and unreliable Wi-Fi. Linksys has always been a pioneer in home networking and I knew this was the team that could innovate and deliver the ultimate Wi-Fi experience.  Velop is a union of performance, design, and ease-of-use and provides what everyone wants – seamless, reliable Wi-Fi.  Linksys has set the bar for true mesh networking systems.”

Velop uses the three radios dynamically to determine the optimal path from the gateway “parent” node to each “child” node to ensure the fastest speeds to all client devices, regardless of the node to which they are connected. Dynamic channel-scanning algorithms evaluate the unique conditions of the wireless environment to select the best band (either 2.4 GHz or one of the two 5 GHz radios onboard) as well as the channels within each of the bands, to improve performance between nodes and client devices.

Most Tri-Band routers do not use multiple mesh configurations resulting in a bottleneck effect due to their static “backhaul”, where a single radio is defined for inter-node communication, limiting their mesh capabilities. Velop can also use an Ethernet connection for inter-node communication to allow all three radios to communicate with clients and help Wi-Fi reach distant locations, such as the outdoor garage.

Each node is a small tower standing just 18cms in height, with a footprint 88% smaller than the average router.

The vertical orientation has performance benefits, with the six internal antennas placed at the top and middle of the unit, some pushing signal up and down and others pushing signal left and right. This improves Velop Wi-Fi performance in both single story and multi-storey homes. To eliminate cable clutter, the base of the design features a cavity where power and Ethernet ports are hidden and a small notch with rubber tabs to organise cables in a clean and tidy manner.

The Linksys app has been completely redesigned and includes an innovative set-up process for Velop. The entire set-up flow happens within the app and uses Bluetooth to securely communicate between the mobile device and the nodes. This resolves a critical issue in the installation of a new Wi-Fi network: when the user customises the network name to their liking, the app maintains a connection to Velop and does not force the user to exit the app and change Wi-Fi settings on the mobile device.

The app presents animated visuals and troubleshooting instructions to guide even novice Wi-Fi users through the uninstallation of current networking hardware and installation of the parent node, which connects to the Internet service provider's modem, then subsequent child nodes, to create a reliable Wi-Fi network.

After a successful setup, users will be automatically directed to the main dashboard of the Linksys app where they can confirm the connection to the Internet and see how many devices are connected to Velop. The dashboard also provides quick access to their Wi-Fi name and password, guest access, parental controls and device prioritisation. The user can email or text their guest network name and password to a friend, block a game console during homework time, or prioritise a smart TV for movie night. The Linksys app is the single app for all Linksys app-enabled products including Max-Stream and Velop.

The Velop is the first to use Qualcomm's System on a Chip – a 716 MHz quad-core ARM Cortex-A7 processor, three Wi-Fi radios (one 2.4 GHz and two 5.0 GHz) and two auto-sensing LAN/WAN Gigabit ports. It has 4GB of flash memory, 512MB DDR3 memory, and a Bluetooth 4.0/LE radio.

It has a MU-MIMO antenna which has six antennas and high power amplifiers.

Each Velop node is a Tri-Band AC 2x2 802.11ac Wave 2 with MU-MIMO radio configuration with combined speed up to 2200 Mbps. This technical design provides faster speeds at the edge of the network by using algorithms to achieve optimal path calculations. This eliminates the bottleneck effect that is present with traditional router and range extender combinations as well as dual-band modular Wi-Fi systems.

Each node can choose the best path to route data between a client and the Internet. If any node loses connection to another node, the remaining nodes will self-heal and re-establish the Internet connection through other nodes

Velop will dynamically scan the available channels and select the best combination of bands and channels to optimise performance at the time of setup or whenever the user chooses. The Linksys app has a channel finder feature which will automatically find the best channels on demand and resolve congestion and interference issues that can create by competing Wi-Fi signals.

It supports one network name and password, one admin login, one interface for management and monitoring, and one guest network for the whole home. Mobile devices can roam reliably from node-to-node without interruption.

Velop is connected to a cloud service that will automatically monitor the status of firmware and update accordingly for security and performance. The combination of firmware and app updates will continue to unlock new features and improve performance over time. Some whole home Wi-Fi systems require manual firmware updates making them vulnerable to security infringements. Users have the option to turn off automatic updates.

More in this category: « Nokia, Vodafone, Telit collaborate on Narrowband-IoT trial Garmin makes 2017 GPS range even smarter »
Share News tips for the iTWire Journalists? Your tip will be anonymous