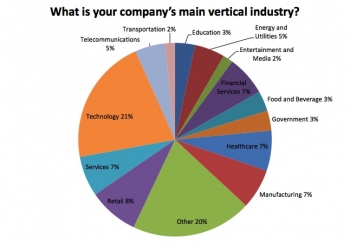 A new survey has found that Internet of Things (IoT) development work is largely the province of smaller businesses, but they are working across a diverse range of industry sectors.

As the above pie chart shows, the ANZ developers are active in a wide variety of industries, most commonly technology but also retail, financial services, healthcare, manufacturing, and services.

They also tend to work in smaller businesses: 54% of them in companies with fewer than 10 employees, and another 29% with 10-100. Internationally, the figures were 37% and 23% respectively.

{loadposition stephen08}Embarcadero senior director for APJ Malcolm Groves told iTWire that the company had noticed examples of larger organisations choosing to engage a smaller outside company for early projects. (This could be a deliberate strategy to avoid the cost and effort of building an internal IoT team before any business benefits have been proven.)

He also noted that companies putting money into IoT projects do not see them merely as learning experiences, they expect real returns even in the short term.

46% of ANZ developers surveyed said they expect the Thing they are working on to have a business impact this year, and another 16% said it had already happened.

And IoT is largely about business: only 8% of the ANZ developers said they were targeting only the consumer market, compared with 58% aiming exclusively at business.

Some of Embarcadero's ANZ customers are "way ahead" in terms of expertise and are already exporting to the rest of our region and further afield, Groves said, adding that his observation was very company-specific and he could not say how the local industry as a whole is placed.

The global survey showed that as far as broad regions are concerned, APAC fell between the Americas and EMEA in terms of getting IoT projects into the hands of users. 14% had released a Thing by then end of 2014, with another 12% having reached the pilot or beta stage.

"This [IoT] is one area where there is a level playing field at the moment," he said.

One problem facing IoT developers is that there are "too many platforms and choices of protocol," said Groves, so a substantial effort goes into "gluing together" different pieces of the puzzle.

For example, a full IP networking stack is too heavy for some devices, so Z-Wave, ZigBee and other wireless standards are used for communications. Furthermore, the reliability provided by TCP/IP may not be required by IoT devices. For example, if a sensor reports air temperature every 20 seconds, it probably won't matter if the occasional measurement is lost in transmission.

Groves suggests a likely outcome is that the industry will coalesce around one or two of these standards for the edge network, with IP used for the core network.

Embarcadero's interest in IoT is that it provides development tools and solutions that address multiple target platforms, Groves explained. "We're putting a lot of effort into Internet of Things and vertical markets."

For instance, the tools make it easy to switch from one wireless technology to another without changing the application code. This allows developers to concentrate on business requirements rather than technology, he said.

While Arduino or Raspberry Pi systems are often used for prototyping, projects usually switch to Android or embedded systems before they go into production, Groves told iTWire, noting that there is a big push towards using Android in the industrial space.

Security is a consideration for IoT projects, especially as the edge protocols don't incorporate as much security as the IP stack. IoT devices are not much of a target at this stage, "but that won't last for long," he said. "A lot of the security will emerge as crises occur."

While it is not Embarcadero's role to provide security features for IoT projects, it will make it "incredibly easy for the developer to roll them out" as standards emerge.

IoT has been around for some time but under different names such as M2M (machine to machine communication), and "we've been waiting for this to take off for a while," said Groves.

"Maybe this is the time it will."

More in this category: « Internet of things-connected fridge implicated in botnet spam email attack Interoperability the key to industrial Internet of Things, says consortium »
Share News tips for the iTWire Journalists? Your tip will be anonymous