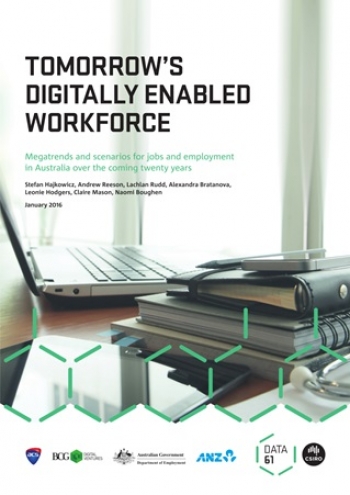 Insufficient ICT skills is one of a number of barriers holding back some Australian organisations and businesses from moving forward on IoT projects and taking advantage of the rapidly growing Internet of Things industry in Australia, according to the CSIRO.

The CSIRO’s report - Tomorrow’s Digitally Enabled Workforce - dated January this year, reveals that Australian IT executives found that insufficient skills is the top barrier (30% of  respondents to a survey) to the uptake of IoT technologies.

The report notes that IoT is one of the “most significant technology trends happening as we speak” and it’s estimated that by 2025, the total global value of IoT technology will be US$S6.2 trillion.

“From wearable technology through to autonomous cars and smart homes, the effect of IoT will be profound and Australia is now ready to embrace innovation and grow its start-up ecosystem,” the CSIRO says.

The CSIRO’s report examined plausible futures for jobs and employment markets in Australia over the coming 20 years, and identifies megatrends and scenarios.

The CSIRO report prompted Ryan Johnson, Director of Categories at Upwork, the US-based global freelancing platform for connecting businesses and independent professionals, to observe that “as IoT adoption becomes more widespread, companies are looking to take advantage of this new connected landscape.”

According to Johnson, companies looking to make the most of IoT by bringing development in-house “are quickly realising that they don’t have the requisite skills they need to support it”.

“Finding these people is proving to be a big challenge for companies. Many companies are going to our platform to find professionals with the skills they need to support IoT initiatives.”

Upwork lists the biggest growth category as ‘Wearables’, which it says has seen a 62% YOY growth.

According to the CSIRO report, the recent ascendancy of the peer-to-peer (P2P) marketplace -  Upwork, Freelancer, Kaggle, Task Rabbit - and the rise of platform economics in a globalised labour market characterised by entrepreneurial activity is “likely to change traditional employment models”.

The CSIRO also says that many P2P models and employment platforms are in the early phases of development and already showing signs of rapid growth.

In its report, the CSIRO has identified six megatrends for jobs and employment markets over the coming twenty years as:

1. The second half of the chessboard

The explosion in device connectivity, data volumes and computing speed, combined with rapid advances in automated systems and artificial intelligence means         that robotic devices can perform many tasks more quickly, safely and efficiently than humans

Digital technology and the new world of ‘platform economics’ is changing employment markets and organisational structures.  Jobs of the future are likely to be     more flexible, agile, networked and connected

3. The era of the entrepreneur

The ideal job within a large organisation may not be awaiting an increasing number of future job seekers. This means individuals will need to create their own     job. This will require entrepreneurial skills and aptitudes

Along with many other advanced and emerging economies, Australia’s population is ageing with growing life expectancies. Retirement ages are likely to push back     further and an organisation’s employee profile is likely to contain more diverse age groups and more diverse cultural backgrounds

Increased use of automated systems is raising the complexity of tasks and requiring higher skill levels for entry-level positions. Income growth in Asia is     associated with increased educational and skills levels, as well as growing competition for Australia’s labour force. Many low skilled jobs are being offshored     or automated. The consequence is the likelihood of a raised skills and education bar for entry into many professions and occupations

Employment growth in the service industries, in particular education and healthcare, has driven job creation in recent times. This is likely to continue into     the future as we move to a knowledge economy. Service sector jobs requiring social interaction skills and emotional intelligence will become increasingly     important.

And, the CSIRO suggests in the report, new 10 skills and mindsets which it says are needed for the future, including:

1.    Education and training is becoming ever more important

2.    New capabilities are needed for new jobs of the future

3.    Digital literacy is needed alongside numeracy and literacy

4.    The changing importance of STEM (whilst participation rates are in decline)

5.    Aptitudes and mindsets to handle a dynamic labour market

10.    Improved understanding of the peer-to-peer (and freelancer) economy

Dr. Stefan Hajkowicz, Senior Principal Scientist - Strategy And Foresight at the CSIRO's data innovation group, Data61, says that the main conclusion drawn from the study is that Australia is entering into a period of “rapid technology fuelled disruption of labour markets”.

According to Dr Hajkowicz, the challenge is working out how to differentiate and “plugin your skill sets, with all this advanced technology that makes you more employable not less employable in the future”.

“So there are transitions that are coming and we’ve just got to get on the front foot and start making those transitions.”

Dr Hajkowicz says the report covers a lot of other material such as the ageing population and changing demographics, which is going to influence the workforce.

He also notes that the report looks at the rising skillsets and capabilities right across Asia, “and the Internet connection that plugs us into them is going to bring those skillsets in competition with our own”.

“The report looks at the peer to peer economy, the rise of the freelancer and portfolio worker who may have multiple employers, and also looks at the importance of entrepreneurial activity and innovation in tomorrow’s labour market - where a lot of people, that job is just not there waiting for them, they’ve got to create it themselves.”

Dr Hajkowicz says that the report covers what the future might look like, and “it's to help policy makers and industry and government make wiser choices about how to build the workforce Australia needs and wants”.

More in this category: « Growing ‘lack of trust’, concerns over privacy by Internet users IoT increasingly a tool for analysing customer behaviour: survey »
Share News tips for the iTWire Journalists? Your tip will be anonymous