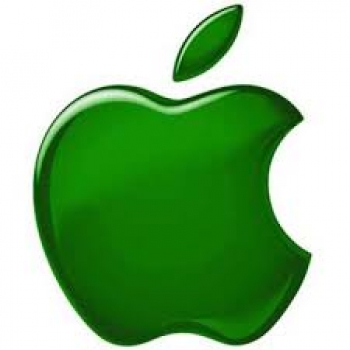 A conservative climate change denialist group has criticised Apple for using renewable energy at the expense of the company's bottom line. CEO Tim Cook says if you don’t like Apple’s energy policy, you are free to sell your shares.

The row broke out at the company’s annual shareholder meeting, where Justin Danhof, a representative of the National Center for Public Policy Research (NCPPR), a right wing think tank, said:

“We are asking the company to be transparent about its membership in, and payments to, trade groups and outside organisations that are actively promoting ‘top-down environmentalism’ rather than working to advance shareholder value.”

The statement spoke of “climate change hysteria” and said Apple should source the cheapest energy, not the greenest. The NCPPR accused Apple of ”proactively acceding to DC’s regulatory morass.”

What ensued was the only time I can recall seeing Tim Cook angry, and he categorically rejected the worldview behind the NCPPR's advocacy. He said that there are many things Apple does because they are right and just, and that a return on investment (ROI) was not the primary consideration on such issues.

"When we work on making our devices accessible by the blind," he said, "I don't consider the bloody ROI." He said that the same thing about environmental issues, worker safety, and other areas where Apple is a leader. “If you want me to do things only for ROI reasons, you should get out of this stock."

More in this category: « Lies, damned lies, and conceptual leaps - coal and IT Gartner: Carbon emissions will be a consideration when purchasing cloud by 2025 »
Share News tips for the iTWire Journalists? Your tip will be anonymous