Xiaomi reaches No.2 in Q2 2021 for first time, but Apple still leads the profit and revenue race 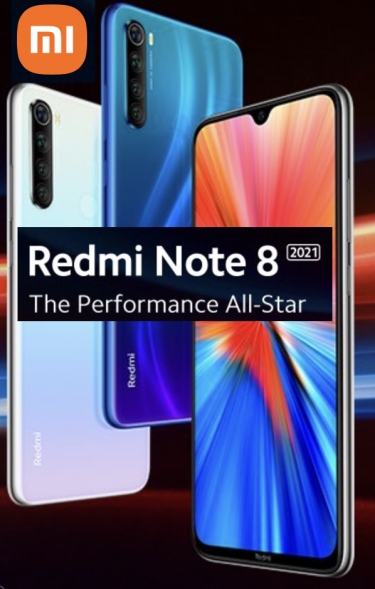 Canalys' stats for Q1 2021 show Xiaomi in No.2 spot behind Samsung for the first time, pushing Apple to third, with the BKK-owned brands Oppo and Vivo in fourth and fifth spots, with Xiaomi's success at the expense of Huawei, but it's still Apple that makes the most money - and is BKK the real No.1?

In the world of smartphones, there's Apple, setting the pace, despite companies like Huawei and Samsung having invested in camera tech, screens and other features to try and get an edge over Apple, Apple still makes huge profits, leaving everyone else to play in lower tier and lower profit spaces.

Samsung sells a huge number of phones, but the vast majority of phones Samsung sells are not in top of the line S and Note series smartphones, but the A-series and lower, where the large profits Apple makes with its much more tight integrated hardware, software, consistent ease of use, security and design, and the overall ecosystem of apps, cases, charges, accessories, intertwined with effortless interoperability with iPads, Macs, Apple Watches, Apple TVs, TV shows, movies, music, news, fitness and more.

Canalys says global smartphone shipments increased 12% "as vaccines rolled out around the world, and the new normal for economies and citizens started to take shape."

Like Oppo, Xiaomi has released more expensive "flagship" models with great features at prices a few hundred dollars cheaper than an iPhone 12, and well over $1000 when compared to the iPhone 12 Pro Max with 256 or 512GB.

Of course these companies want to create higher spec and higher value models to make more profit, but as Samsung has discovered, having an S or Note series doesn't guarantee the vast masses are going to buy it the way they do an iPhone.

That's why Samsung has its A-series smartphones in mid to upper mid-range configurations to fight against the Oppo, Xiaomi, Realme, Motorola, TCL, Vivo, OnePlus and other brands out there.

Also - we have BKK, which owns both Oppo and Vivo. Given Oppo and Vivo have 10% each for a 20% total, and on that metric, BKK outsells even Samsung at its 19% share. 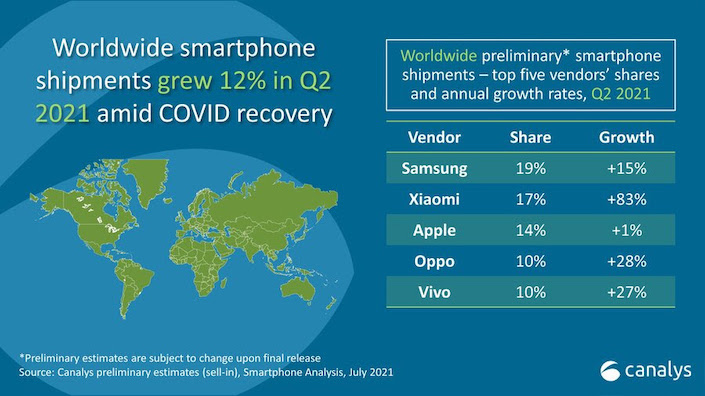 Samsung, of course, makes TVs, computers, media players, connected and regular home appliances and much more, but the winner of the race for maximum profits, maximum interoperability, usability, consistency, App Library, security and more, is Apple setting the pace for all its competitors to follow.

Apple is due to release its Q3 2021 earnings report on July 27 in the US, and while savvy customers know this is the quarter that will see the next iPhone launched in what is usually September, meaning softer sales in this quarter as some people hold off knowing the next model is coming in less than three months, Apple is stronger than ever.

According to MacDailyNews, Apple's Q2 2021 results blew away Wall St exceptions and showed healthy increases on YoY results, as you can see below, and Apple will still report making tens of billions of dollars in its Q3 2021 results next week, and plenty more once the new 2021 iPhone models are out.

Canalys Research Manager Ben Stanton said: "Xiaomi is growing its overseas business rapidly,” said . “For example, its shipments increased more than 300% in Latin America, 150% Africa and 50% in Western Europe. And as it grows, it evolves.

"It is now transforming its business model from challenger to incumbent, with
initiatives such as channel partner consolidation and more careful management of older stock in the open market. It is still largely skewed toward the mass market, however, and compared with Samsung and Apple, its average selling price is around 40% and 75% cheaper respectively.

"So a major priority for Xiaomi this year is to grow sales of its high-end devices, such as the Mi 11 Ultra. But it will be a tough battle, with Oppo and Vivo sharing the same objective, and both willing to spend big on above-the-line marketing to build their brands in a way that Xiaomi is not.

"All vendors are fighting hard to secure component supply amid global shortages, but Xiaomi already has its sights set on the next prize: displacing Samsung to become the world’s largest vendor.”

More in this category: « Samsung's most affordable Galaxy Tab A7 Lite now available in Australia Sony unveils its HT-A9 and HT-A7000 soundbars for an immersive experience »
Share News tips for the iTWire Journalists? Your tip will be anonymous