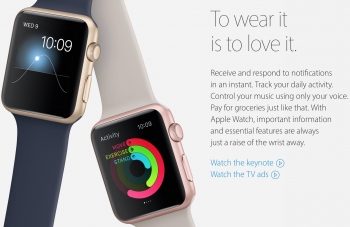 Despite doubters who suggested Apple Watch might fail, Juniper’s research says Apple Watch claimed over 50% of 2015 smartwatch market in less than a year of sales.

Well respected research firm Juniper now says that the Apple Watch continues to dominate sales, claiming over 50% of the 2015 smartwatch market, despite less than a year on sale, and despite claims of a successor to the Apple Watch coming in March.

Juniper says its ‘new data’ shows the Apple Watch has claimed 52% of global smartwatch shipments in 2015, despite only launching at the end of April, with popularity far eclipsing ‘that of rival vendors, with Android Wear shipments comprising less than 10% of sales for the year.

According to the new research, Samsung’s Tizen-based Gear S2 has not achieved strong sales volumes since it launched in November despite being well received. Most other smartwatch sales are currently coming from cheaper, simpler devices from a range of smaller players, such as Martian, X and Razer, the latter with the recently-announced Nabu Watch.

However, Juniper does say there is a lack of a use case leading to convergence and simplification.

Explaining this, Juniper points to its new research, on sale to relevant parties at relevant prices, dubbed ‘Smartwatches: Trends, Vendor Strategies & Forecasts 2016-2020,’ which ‘demonstrates how the continued lack of a strong use case for smartwatches means that, Apple Watch aside, the market thus far has been driven by lower priced devices with more basic functionality.’

These devices, from the Breitling B55 Connected to the Martian Guess Connected are typically providing basic notification and tracking functions, without an app-capable operating system on the device itself.

Iterating Into the Wearable Future

Juniper says its research argues ‘that while many smartwatch vendors have produced ranges of watches, allowing for customisation and price segmentation, there have been no great leaps forward that have revolutionised the category.’

‘The smartwatch is now a category waiting for a market,’ said research author James Moar. ‘Newer devices have offered more polished looks and subtly different functions, but no large changes in device capabilities or usage. With smartwatch functions established, it is now up to consumers to decide if they want them, rather than technology companies providing more reasons.’

As per usual, Juniper has a white paper available for free download with further details of the new research, with that whitepaper dubbed ‘Smartwatches: Clocking the Trend’.

More in this category: « Mac OS, iOS, watchOS, tvOS get new OS betas, iOS 9.3 gets F.lux night view and more Want to stop Windows 7 and 8.1 pestering you to upgrade to Windows 10? Good luck »
Share News tips for the iTWire Journalists? Your tip will be anonymous