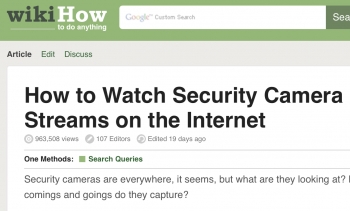 Watching webcams and unsecured security cameras on the Internet is nothing new, but a new site, now reportedly hosted in Russia but with no guarantee of having anything to do with Russians, is allowing access to security cam footage because default passwords haven’t been changed.

If you have an Internet connected device, like your router, or a security camera, or something else, and you haven’t changed the publicly discoverable default password, congratulations - your device can now be accessed by anyone in the world that knows what they’re doing.

No-one seems to be publishing the address of the so-called Russian security cam web site, which reportedly had links to the Cocos Islands, Australia, Cyprus and now Russia, with plenty of sites predictably suggesting it is Russian hackers themselves who are behind the site.

Part of the motivation for the so-called Russian security site appears to have been not only to let people find unprotected security cameras, but also to raise education and awareness of the risk of leaving technology with default passwords on.

The UK’s Information Commissioner’s Office (ICO) has set up a blog explaining how you can protect your camera from being hacked, with the no.1 tip being to change the default password.

The ICO says those ‘default login credentials for thousands of cameras are freely available online’, and is seeing footage being ‘collected’ - by anyone with access ‘from security cameras used by businesses and members of the public, ranging from CCTC networks… to built-in cameras on baby monitors”.

350,000 such cameras were sold in the UK alone, with thousands sold in other countries too, including Australia - for which various sites claim to have seen Australian camera footage.

The whole episode is also a serious indictment of security camera manufacturers who seemingly refuse to force end users to change their damn passwords, leaving one heck of a giant hole in what is supposed to be a security system.

So… If you don’t want to see your home, business or yourself or family being streamed live onto the Internet, change your passwords and investigate your computers, networks and devices to ensure they’re fully up-to-date.

Reconsider doing things like putting security cameras in adult bedrooms or your bathroom, so intimate activities aren’t being live streamed to anyone without your knowledge.

And remember, even if you’ve done all these things to protect yourself, and more, hackers are a very clever bunch. If something’s on the Internet it can probably be hacked no matter how careful your protections.

So think carefully about where you put cameras, lest you unwittingly become the next viral video sensation.