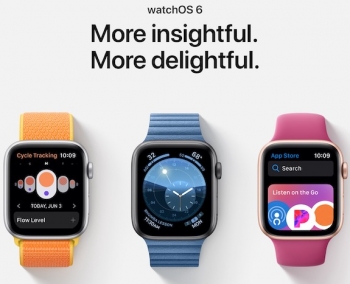 A new Apple Watch is due later this year, but as always, Apple has new versions of its watchOS every year, too.

As a user of Apple Watch since the very beginning, I've had a wrist-worn front seat to the continual evolution Apple Watch has delivered, from ever faster app launching, through to spoken Siri feedback, Apple Music and Internet radio access, especially through AirPods, cellular connectivity to make Apple Watch an independent smartphone whenever needed, ever better watch face complications, and plenty more.

Using Apple Watch as a phone is cool, whether via the watch itself acting as speaker and microphone, or with AirPods. There have been times when I've surprisingly left my iPhone behind in the house when hanging out the clothes, and suddenly my watch is ringing.

Perhaps we will finally get Apple Watch able to connect to international networks rather than being locked to the networks of the country of purchase with the forthcoming 2019 Apple Watch Series 5, but given my iPhone is virtually always with me, this hasn't been an issue.

And given the last two generations of Apple Watch have had cellular capability, being able to go for a walk and not take an iPhone with you, coupled with various radio stations you can listen to as well as Apple Music streaming (or loaded onto your Watch) and you have the connectivity you need when you need it.

There's also the fact that an Apple Watch, AirPods and an iPhone are the perfect combination - whether exercising, in everyday use, in the car or wherever you are. Use the Digital Crown to effortlessly change the volume when listening to music, radio or video, and effortless control playback with on-screen controls that automatically pop-up when you are experiencing digital media.

Being able to query Siri while your phone is playing digital media is also handy, as is simply being able to ask Siri questions or get it to do things is joyous - and fast.

Answering messages by voice, voice dictation, quick emoji and pre-written sentence responses and the ability to scribble words out a letter a time are also easy and fun, although I was disappointed to see the animated faces, hands and hearts disappear as an option. Perhaps Apple will re-introduce them - they were fun!

Then there is Apple's watch bands - and those of third parties - have also been a joy to use, allowing anyone to change bands to suit different occasions, and with a very wide range out there, virtually any look can be accommodated.

Indeed, this is an important thing to consider, as is an AppleCare purchase, because replacing a broken Apple Watch screen isn't cheap, given the screen is an integral part of the watch and not like replacing the screen on a smartphone.

Apple talks about its new App Store on Apple Watch below, and this should see a blossoming in the number and quality of apps available. I have tons of apps installed, from games, to Apple Remote, to calculators, currency converters, weather apps, Shazam, Sleep Cycle, Uber, Wallet and many, many more.

So, what advances is Apple promising for watchOS 6?

Well, Apple starts off by nothing that the new OS "empowers Apple Watch users to better manage their health and fitness, and gives access to dynamic new watch faces and the App Store directly on Apple Watch".

Jeff Williams, Apple’s chief operating officer said: "Apple Watch has become an indispensable part of our customers’ everyday lives, from helping users stay connected to the people and information they care about, to inspiring them to live a better and more active day.

“watchOS 6 extends our commitment to helping users better manage their health and fitness with powerful and personal new tools.”

Here are the headline features:

"The new Cycle Tracking app gives women the ability to log important information related to their menstrual cycles and see predicted timing for their next period and fertile window using the convenience of Apple Watch.

"The daily log function enables the quick addition of information related to the menstrual cycle, including current period, flow, symptoms, results from ovulation prediction kits and other elements of fertility tracking. The new Cycle Tracking feature is also available on iPhone with iOS 13.

"Maintenance of hearing health positively impacts the quality of life and studies have shown that hearing loss has been associated with cognitive decline.

"With the optimal position of Apple Watch on the wrist, the Noise app helps users understand the sound levels in environments such as concerts and sporting events that could negatively impact hearing. As the sound levels change, the app’s decibel meter moves in real time.

"The watch can send a notification if the decibel level reaches 90 decibels, which can begin to impact hearing after four hours per week of exposure at this level, according to the World Health Organisation.

"Customers are passionate about closing their Activity rings and the new Trends tab in the Activity app on iPhone now gives users a long-term view of their activity behaviour to help them understand their progress. At a glance, the tab shows whether the trends are up or down for key metrics such as active kilojoules, exercise minutes, walking pace and others. If the last 90 days of activity shows a downward trend relative to the last 365 days, the Activity app offers coaching to help the user get back on track."

As you'd expect, Apple says of all its "Apple Watch features are designed to protect user privacy. None of the audio or sounds in the environment are saved by the Noise app or sent to Apple — only the decibel level is sampled.

"The information from Apple Watch health features, including the new Cycle Tracking app, will be visible within the redesigned Health app on iOS 13. All data is encrypted on-device and if iCloud back up is selected by the user, data is encrypted in iCloud."

"New colours of the Sport Band and Sport Loop in Canary Yellow, Dragon Fruit and Cornflower are available beginning today, along with a new Pride Edition Sport Loop with a donation being made to the following LGBTQ advocacy organisations: Encircle, Gender Spectrum, GLSEN, ILGA, PFLAG, the National Center for Transgender Equality and The Trevor Project."

"The developer preview of watchOS 6 is now available to Apple Developer Program members at developer.apple.com.

"New software features will be available this spring as a free software update for Apple Watch Series 1 or later paired with iPhone 6s or later running iOS 13 or later. For more information, visit the Apple Watch and watchOS 6 preview page here."

More in this category: « New Chromebooks for 2019: Google's answer to Windows, Mac and iPadOS VIDEO: Belkin's Boost Up Power Bank delivers portable power for Apple Watch »
Share News tips for the iTWire Journalists? Your tip will be anonymous