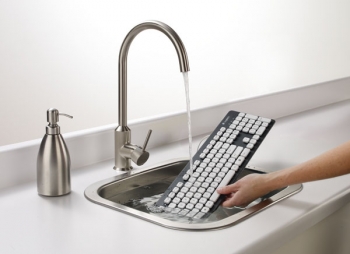 Multitasking at the computer has become a lot more viable with Logitech’s K310, a keyboard described as the first of its kind to be fully washable.

Now no matter what your occupation, whether it be taxidermist, nurse or exotic film director you can now do your work or play with the safety of being able to give your keyboard a good scrub at the end of the day.

The need to worry about the hygiene of your computer activities will soon be a thing of the past with a simple clean of the keyboard, if Logitech has its way.

According to Logitech you can dip its K310 into up to 28 centimetres of water and give it a good scrub, and the keyboard comes fully equipped with drainage holes in the bottom for easy cleaning.

The numbers and letters are also laser etched onto the keys rather than the usual painted-on style. Convenient.

Logitech is selling the K310 for $49 in Australia, but liquid soap is BYO. Also it’s not compatible with any dishwashers, so don’t even try.

More in this category: « Gmail 'compose' option the new normal eBay takes Shopping.com under its wing »
back to top