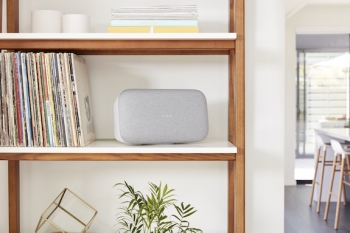 It has taken several months to arrive Down Under after launching in the US in October 2017, but the biggest and loudest version of Google's Home speakers is finally set to go to Max down under for A$549.

Hearing Google talking about creating Max makes you think of Macs, for a moment, but of course, Max is Google's while Macs are Apple's.

Google Home Max has already been well reviewed out there online; just do a search for "google home max review" and on the front page of search results alone, you see all but one give it 4 our of 5 stars, while Engadget goes as high as 4.5 stars.

It should come as no surprise, of course, given what Google says is "premium hardware" within, including "two 4.5-inch high-excursion woofers" for "deep, powerful bass".

We're also reminded that Max is really, really loud, meaning "you can fill even the largest room in your home with your favourite music", with Max "20 times more powerful than [the standard] Google Home".

At a demo on 1 August at Google's Sydney headquarters by Chris Chan, the company's product manager for Google Home, the media was treated to a demo of Max's audio power, and indeed, you could hear the various instruments and voices very clearly, and without distortion, even when Max was set to maximum volume, which naturally, was the intended effect and impressive to see.

Of course, I've seen a similar demo with Apple's HomePod, which can likewise go to very loud volumes without distortion, so it's good to see the competitive spirit alive and well between Google and Apple as they battle each other and competitors for the hearts, minds and wallets of costumers.

Just as Apple's HomePod can analyse a room to fine tune its sound output, so too does Google Home Max offer a similar sounding feature.

Google says its Smart Sound Max is powered by "Google AI", which can "automatically adapt itself to you and your environment".

Chan explains in his blog post that "once you’ve set up Max (connecting to your compatible device and Wifi), it will automatically tune itself based on where you’ve placed it in the room", and that "without lifting a finger, your music will sound just as it was intended when it left the production studio. And all of this is done dynamically, so if you decide to move Max to the other side of the room, it will adapt within seconds. There’s no extra setup or testing required".

Of course, as an intelligent home speaker with Google Assistant built-in, you can use it for home automation which we'll get to in a moment, but it is designed to play all your favourite tunes, with Google characterising this as "your personal DJ, 24/7".

Chan explains that "Google Home Max is always ready to start your favourite song, pause or turn it up, all with just your voice. Can’t quite remember the name of that favourite summer jam? Your Assistant can find it with just a few small details".

As you'd expect, Google Home Max "works with YouTube Music, Spotify, TuneIn and Deezer – and Chromecast is built in, meaning you can cast from your phone with many more services. For all of your other music and devices, Max has support for both Bluetooth and aux-in, so plug in your record player and dust off your vinyl".

There are two speakers inside Google Home Max, so it is already in a "stereo configuration", but of course you can pair two Google Home Maxs together to get even louder and more impressive sound.

Normally, Home Max is positioned horizontally, but you can also place it vertically, with a piece of magnetised rubber-like material acting as a stand between the surface you are placing Home Max on, and Home Max itself.

With two speakers set up, Google prefers to have its speakers in vertical position, as you'll see in the included video.

You can even do multi-room audio where several Google Home speakers, be they the smaller two versions or multiples of the Google Home Max, can be made to play the same audio.

We heard a sample of this during Chan's demo, and as you'd expect, it worked and was impressive.

My mother has been using HomePod and Google Home, and she greatly enjoys asking Siri to play various songs via Apple Music. The HomePod is set up with my Apple ID, which has an active Apple Music subscription, and my mother has listened to more music that ever before, even asking for genres of music like piano melodies, of which there are some great ones including piano versions of famous songs.

Mum also enjoys looking out for versions of her favourite songs sung by different artists, with a classic track like Besame Mucho offering many wonderful versions out there from some of the world's greatest artists, like the Beatles, Dean Martin, Frank Sinatra, Il Divo, Diana Krall and more.

I also have a YouTube Red subscription and will tie it into the Google Home Max I have received for review, so Mum can compare the two together, but Mum does love using Google Home to play her favourite radio stations via TuneIn Radio, and of course, all by voice – with dramatically better sound quality than your typical AM radio.

So I very much look forward to getting Mum's view on the speakers, and which one she thinks has better audio, although as I did read elsewhere on the Web, HomePod has been described as "retina for your ears", so Apple certainly provides very tough competition for its competitors to live up to.

I haven't heard both devices in a side-by-side comparison, but I do look forward to experiencing that for myself, along with Mum, so more on that later.

In terms of home automation, Google Home Max via Google Assistant "works with more than 5000 devices worldwide, and 100+ home automation devices from more than 50 brands here in Australia – including Nest, Belkin TP-Link and Philips Hue and more".

This is exactly the same as Google Home and Google Home Mini, and as you'd expect from Siri and Alexa, and while the reported number of devices compatible with Google and Alexa is much higher than Siri, each intelligent assistant is growing in leaps and bounds day by day.

Chan also reminds us that "with Multiple Actions available on Google Home Max you can get more done at the same time. If you have a compatible smart plug and bulbs, try saying, 'Hey Google, dim the lights, play a summer time playlist'."

At A$549, Google Home Max is $50 more than Apple's HomePod, and for the most part, the ecosystem you belong to will help dictate which brand of smart speaker you decide to buy.

Obviously, Amazon has a lot of traction with its Echo range of smart speakers, while there are also players like Sonos, and a range of other speaker and even headset makers who have integrated Google Assistant or Amazon Alexa, and with Apple products, of course, Siri.

Google Home Max will be available from JB Hi-Fi, Harvey Norman, David Jones, The Good Guys, Officeworks and The Google Store for A$549 from 9 August.

There are three videos below – the first is my recording of the Google Home Max demo to the media.

As you can see below, there are six songs being played in this video, all of which have naturally seen the song's owners assert copyright control with monetisation going to the relevant parties.

However, the song "Pray for Me" by The Weeknd and Kendrick Lamar was "blocked worldwide" from being played at all, so to make this video playable I had to use the YouTube option to remove the song entirely, so in that section you'll just hear silence.

It only goes for about 40 seconds, however, so don't panic, just keep listening and the audio will return soon enough – indeed, as noted, in less than a minute!

The six songs are Feel It Still by Portugal. The Man, Love Me Now by Ziggy Alberts, Pray For Me by The Weeknd and Kendrick Lamar, Mystify by INXS on the turntable and the Aux-In port, Irina by Ryan Leslie and finally Finesse by Bruno Mars.

After this video are two more from Google itself introducing Home Max to the world, videos that have been around since Max debuted in the US.