VIDEOS: Curiosity is the key to happiness, but it's undervalued 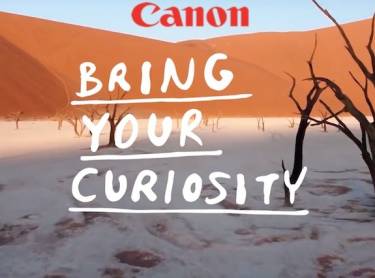 A new report says Australia is undervaluing curiosity, despite it being "a powerful trait that supports a fuller, more meaningful life".

New research shows "the vast majority of Australians believe being curious is crucial for our mental health and well-being".

But is exploring the unknown valued in Australia? A study released today by Canon Australia dubbed "Bring Your Curiosity", probing the state of curiosity across the country, has found that "two thirds agree the nation doesn’t recognise or reward curiosity enough".

Of course, knowledge about curiosity being a vital part of life is no secret – some of the world's best minds have talked up the benefits of curiosity for decades, if not centuries and even millennia.

Before we move on with the rest of Canon Australia's report, here are some fine examples.

More excellent quotes about curiosity are below, if you're curious to learn what they are.

So, what did Canon Australia's survery curiously uncover?

Well, it turns out that less than 50% of more than 1000 respondents surveyed nationwide believe "a curious outlook is valued in their role in the workplace, calling into question Australia’s commitment to promoting innovation and creativity to fuel our economy".

"Yet despite almost a third believing our nation as a whole doesn’t value curiosity, three in five (63%) view Australia as a nation of curious thinkers."

Associate Professor Maria Kangas, of Macquarie University’s Department of Psychology, who worked with Canon on the study, said the research affirms that curiosity has a positive impact on our lives:

“Being curious has a broad range of benefits; it enhances social bonding experiences, making us more empathic, and enables us to live more purposeful lives, while heightening our sense of well-being. It’s clear from the data that curiosity is not a trait that some people have and some don’t – it can be cultivated, facilitated, and encouraged, given the right stimuli."

With most Australians perceiving curiosity as having an enquiring mind that seeks to understand the world around us, the research also showed that "four out of five Australians agreed with the idea that curiosity can be developed throughout our lives".

Quick hits from the research (with more below):

So, when did we stop asking ‘why’?

What’s gender got to do with it?

Naturally, Canon Australia encourages you to "Bring Your Curiosity".

Encouraging Australians to put more of their authentic selves into the world, Canon said it discovered "three self-confessed ‘uncurious’ individuals and sent them on an adventure beyond their comfort zones. The first of the three travellers was Irene Zagoridis, a 72-year-old Sydney-based grandmother who has devoted her adult life to her family".

"Travelling back home to Greece for the first time in more than six decades, Irene was assigned questionnaires and a daily mood diary by Associate Professor Kangas to assess her feelings throughout her journey. Comparing her outlook before, during and after her memorable trip, Kangas found that Irene’s ‘social curiosity’ and ‘joyous exploration’ markers had improved dramatically – leading to a measurable lift in her sense of well-being."

Jason McLean, director, Canon Consumer Imaging said: "When faced with a host of activities, the research showed over half of all Australians feel most curious when travelling or visiting new places, so we put this to the test. During her travels, it was heartening to see Irene use her camera to view the world differently, and unlock new and exciting experiences on the way.

"Her journey has been a truly inspiring one, and is testament to the fact that there is no age limit for becoming more curious and living a fuller life."

Irene Zagoridis said: "I was born in Greece and came to Australia when I was four. I’ve hardly travelled overseas in my lifetime, and haven’t really been curious about what’s out there either. I guess it’s because everything in my life has been planned out, from my wedding and marriage, to my children and family.

"When Canon approached me, I decided to do something for myself for a change!

“Travelling back to Greece was surreal for me. I didn’t really know how to feel, but I was given a camera to use for my trip, and it truly helped me develop an interest in what’s around me. One of the days, I photographed a couple dancing in a café, and before I knew it, one of them invited me to his 30th birthday gathering.

"Through them, I also discovered a poppy field not too far away – it made me feel like a little girl again, running through my grandmother’s farm. The whole experience was a special one for me, a dream come true. Using my camera also pushed me to see the world in a different way, something I had never done before,” Irene concluded.

More information and to see Irene’s beautiful journey, visit the Bring Your Curiosity website, although it is also embedded below, with Canon asking is to "stay tuned for the stories of the next two travellers!"

Here's Irene's video and Canon's own video, after which are some more curiously great quotes about curiosity, so please read on!

Curiosity is one of the great secrets of happiness.

Great personal style is an extreme curiosity about yourself.

My Alma mater was books, a good library... I could spend the rest of my life reading, just satisfying my curiosity.

Curiosity will conquer fear even more than bravery will.

First love is only a little foolishness and a lot of curiosity.

Wonder is the beginning of wisdom.

Think and wonder, wonder and think.

Curiosity is the lust of the mind.

Curiosity killed the cat, but for a while I was a suspect.

`Curiouser and curiouser!' cried Alice (she was so much surprised, that for the moment she quite forgot how to speak good English); `now I'm opening out like the largest telescope that ever was! Good-bye, feet!' (for when she looked down at her feet, they seemed to be almost out of sight, they were getting so far off). `Oh, my poor little feet, I wonder who will put on your shoes and stockings for you now, dears? I'm sure I shan't be able! I shall be a great deal too far off to trouble myself about you: you must manage the best way you can; --but I must be kind to them,' thought Alice, `or perhaps they won't walk the way I want to go! Let me see: I'll give them a new pair of boots every Christmas.'

More in this category: « Now hear this: Aussies and Kiwis can finally listen to Audible books via Amazon Echo Stereo, multi-room support arrive for HomePod »
Share News tips for the iTWire Journalists? Your tip will be anonymous