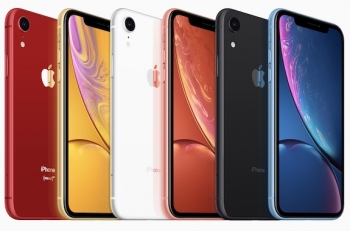 Apple's iPhone XR, starting in Australia at $1229 and going to $1479, is now available to pre-order at last, with retail sales starting from Friday 26 October.

Although the iPhone XR only has one camera on the back, it has the same A12 Bionic processor, giving it the same processing oomph as its more expensive iPhone Xs and Xs Max brethren, but instead of the superior (and more expensive) OLED displays, where each pixel can emit its own light source, the XR uses a traditional LCD screen, which has a backlight across the entire panel that makes true blacks more difficult to attain.

That said, the vast majority of smartphone users have only ever used smartphones with an LCD screen, and being as the iPhone XR at 6.1-inches is larger than the iPhone Xs with only a 5.8-inch screen, it is expected to be a very popular seller with those who don't fancy paying close to, or above, $2000 for a smartphone.

Apple has resurrected its colourful options range, previously only seen with various iPods, and the iPhone 5c line, or via the addition of various leather and silicon cases to the various iPhones in between.

Indeed, we are sure to see ever more see-through models of cases for the iPhone XR range, as people seek to show off their colour of choice.

However, just because Apple has released new iPhones doesn't mean everyone is automatically rushing to get them.

I have been using the iPhone Xs Max, and it is clearly the very best iPhone yet, with better cameras, louder speakers, a brighter and more colourful screen, more RAM, a faster A12 Bionic 7 nanometre processor that is incredibly fast, stereo recording for video and much, much more, and I'm in the process of reviewing it.

It's an incredible iPhone, and the best one you can get, but for those on older iPhones, like a 6, 7, 8 or earlier, the iPhone XR will be a fantastic upgrade at hundreds of dollars less than the Xs or Xs Max.

There are also plenty of choices for those who just don't want to spend more, with second-hand or refurbished iPhones the biggest competition Apple has, with stacks of choices in the sub-$1000 mark, including less powerful iPhones.

A couple of months ago I purchased a refurbished rose gold iPhone SE with 32GB for my Mum for something like $300 from memory, with a full one year warranty, from Dick Smith online, so whatever your budget, there's definitely a new or refurbished as-new smartphone out there for you, and if it's an iPhone 5S or better, it can run iOS 12, too.

However, if you want the most power A12 Bionic processor Apple has ever delivered, but don't want to pay Xs or Xs Max prices, then Apple's wise move to make the XR models available should see it become one of the most popular iPhone ranges ever.

You can learn more about the new iPhone XR here, while Telstra, Optus and Vodafone have all announced iPhone XR models ready for you to pre-order on much more easily payable plans, too.

Apple has also launched new videos showing off the iPhone XR models, which I've embedded below:

More in this category: « Digital inclusion on the up, but more needed to bridge access, digital ability gap: report Apple's 30 October event in Brooklyn to bring new iPads, Macs and more »
back to top