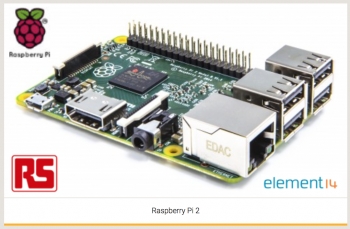 A brand new Raspberry Pi 2 computer board has been announced, with up to 6x the power, twice the memory, able to run Linux, an IoT focused version of Windows 10 for US $35.

The RS Components site says the Pi 2 is ‘on back order for despatch 05/02/2015, delivery within 5 working days from despatch date’.

The Pi 2 has twice the RAM, now at 1GB LPDDR2 SDRAM, a quad-core 900MHz ARM Cortex-A7 CPU with up to 6 times the performance, complete compatibility with Raspberry Pi 1 and, as an ARMv7 processor, ‘can run the full range of ARM GNU/Linux distributions, including Snappy Ubuntu Core, as well as Microsoft Windows 10.’

The version of Windows 10 the Pi 2 can run is not the full desktop version that’s coming, but instead an Internet of Things (IoT) focused version, and it will be ‘free for makers’.

Microsoft says this version of Windows 10 is ‘designed for developers’, and states ‘this is the first in a series of Internet of Things (IoT) programs for the creation of connected devices. This program is tailor-made for both makers and Windows developers entering into the IoT space.

Microsoft also says it ‘will be sharing more details about [its] Windows 10 plans for IoT in the coming months.’

We’re told that ‘the board layout, multimedia subsystem and peripherals remain fully compatible with the Raspberry Pi Model B+, including the use of the extensive 40-pin GPIO (General Purpose Input Output) connector, four USB ports and an efficient switching power supply.’

Also explained is that ‘the increased computing power and memory capacity of the Raspberry Pi 2 will bring benefits to hobbyists, hackers and home developers enabling them to develop more powerful applications that will run faster. In addition, OEMs will also be able to benefit from the new board's greater processing capacity as well as the Raspberry Pi platform's record of reliability and robustness. Those involved in educating the next generation of young programmers will also take notice of this highly capable new board.’

Eben Upton, Founder and Trustee of Raspberry Pi said: “RS is a trusted and reliable source of products, technologies and information for engineers, hobbyists and developers worldwide.

“The first generation Raspberry Pi platform has been widely adopted by many users in academic and consumer circles, and has also found use in industrial applications, where RS has played a very important role.

“The company's DesignSpark community and the extensive range of free DesignSpark product-design software tools are connecting students, users and engineers from many domains around the world.

“The RS approach of providing key resources for software and hardware development complements the goals of the Raspberry Pi Foundation, and we look forward to the continuation of this highly fruitful relationship."

Glenn Jarrett, Global Head of Marketing at RS Components, added, "The low-cost Raspberry Pi platform has proved to be a revolutionary tool in delivering programming to a whole new universe. RS has been honoured once again to have the opportunity to work with the Foundation as a distribution partner for this exciting next important step in the evolution of the Raspberry Pi platform."

One of the FAQs at the blog asks: “Where does the “6x performance” figure come from?”

The answer: “The speedup varies between applications. We’ve seen single-threaded CPU benchmarks that speed up by as little as 1.5x, while Sunspider is around 4x faster, and NEON-enabled multicore video codecs can be over 20x faster. 6x is a typical figure for a multi-threaded CPU benchmark like SysBench.”

So … a new helping of Raspberry Pi has popped out of the oven, and it looks to be the tastiest yet!

More in this category: « VIDEOS: Coles, Woolies will need more than infantry to defeat Kogan Pantry My Home Connect simplifies home security »
Share News tips for the iTWire Journalists? Your tip will be anonymous