VIDEO: Microsoft launches Surface Go at A$599, smallest and most affordable yet 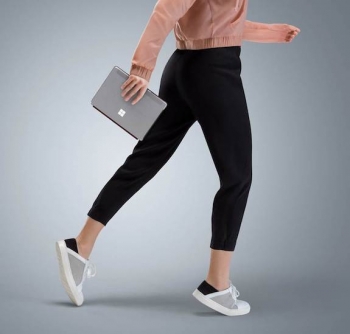 Where do you want to "Go" today? Wherever that is, Microsoft hopes you'll take its new Surface Go, with "up to" nine hours of battery life, a Pentium Gold processor and full x86 software compatibility in a 10-inch package.

Selling "from" US$399, and thus $599 in Australia, Microsoft's new 10-inch sized Surface Go still goes for a price higher than Apple's entry level iPad, and still doesn't come with the keyboard cover or stylus as standard, matching Apple in that regard.

Microsoft's Type Cover is priced at A$139.95, while Microsoft's Pen stylus is identically priced at $139.95, for a total of A$878.90 if you buy all three, which doesn't include a mouse if you want one of those, too, although mice are cheap these days - unless you buy Microsoft's, where its Surface Mouse is $79.95 and its Arc mouse is $119.95. You can buy a Logitech from around $15 from any supermarket or Officeworks store, and cheaper mice exist.

It comes with Windows 10 S by default, the "streamlined edition" that only runs apps from the Microsoft Store, but you can, in a few clicks, convert this to Windows 10 Home, allowing you to run all the x86 and x64 software you want, including the Internet security software you'll doubly want to ensure you're running to protect you from the regular Windows threats out there you need protecting from.

The news comes forth via Panos Panay, who is at pains to promote the Surface Go as having the comforts of a laptop while offering the convenience of a tablet, or in this case a 10-inch tablet, which more or less matches Microsoft's marketing motto for its Surface Pro 3 being "the tablet that can replace your laptop".

Well, in 2018, what's changed is Microsoft's attempt to yet again target the iPad, this time with a device that seems to promise more than enough power for everyday tasks, while at a price point that Microsoft presumably hopes will smash the iPad to smithereens and bring some consumer love Microsoft's way.

Sadly that is likely to be a forlorn hope when all is said and done and months have gone by, with the Surface Go likely to have merely scratched the surface of iPad sales, because when you keep on doing the same thing in an attempt to beat Apple at its game with more or less the same strategy (save for updated hardware and software), it probably will come as zero surprise to see Microsoft achieving the same results.

Points for trying, though – Microsoft was always famed in the past for getting things right on the third go. This even happened with the "new" Windows that started with Windows 8, which was the "new" version 1 of the new Windows, then Windows 8.1 that was the second attempt, followed by Windows 10 (and many updates since) which fixed Windows 8.x's problems, and Windows 10 S which tries to fix them even further for non-power users.

It can also be seen with affordable Surface models, this is Microsoft's third go, as it started with the Surface RT, followed later by the Atom-powered and cheaper Surface 3 two or three years ago that ended up discontinued, and this is now Microsoft's third attempt at a cheaper Surface. Perhaps this time it will be successful against the iPad, iOS and Apple juggernaut, with Microsoft tablets and Windows 10 at least vastly more popular than Android tablets, of which few remain outside the realms of Samsung, Huawei, Lenovo and whoever else still bothers to make them.

So, what does Microsoft's chief product officer Panos Panay have to say at the official Surface Go blog post?

Panos said: "Many of us play different roles throughout the day, moving from work or school to home and everywhere in between. Our team designs every Surface to adapt to that dynamic lifestyle, to strike a balance between performance and versatility, form and function. Our products don’t do just one thing because people don’t do just one thing.

"We pioneered categories like the 2:1 to provide the mobility of a tablet with the performance of a laptop, inspiring new ways of creating. As you pursue your passions, connect with friends and family, and work with your team, the products you’re able to take on the go with you are the ones that can keep up with the huge range of things you want to accomplish. This is true whether you’re a parent and a product-maker like me or a student and amateur photographer like my daughter.

"That’s the idea behind the design of Surface Go – our smallest, lightest, and most affordable Surface yet. When we designed this device, we had to ask ourselves what people want and need from a 10” Surface. The answers seem obvious – lightweight, productive, and accessible to more people. I’m pumped to introduce you to Surface Go, because it’s all those things, and so much more."

Billing it as Microsoft's "smallest, lightest, and most affordable Surface yet", Panos continues:

"The power and connectivity in a device this small gives you the style and productivity Surface is known for in a more convenient package. At just 1.15 pounds and 8.3 mm thin, Surface Go packs portable performance into a 10” device. Starting at [A$599], it represents a new entry point for the Surface family, while keeping the premium qualities that have come to define it.

"In portrait mode, the screen was designed to render the page to the scale of most school textbooks, and in landscape mode, it can render pages side by side as if you were holding a paperback book in hand. At the approximate size of a composition notebook, writing on the screen feels natural and intuitive.

"Since my two youngest daughters have started using Surface Go, I see them watching movies, reading, and drawing on it every day. It’s the perfect device for them. And for me, whether I’m at home, in the office, or on a plane, putting my Surface Pen on the screen and letting my thoughts flow is a necessary step in my creative process. It’s how I work. It’s so easy to carry Surface Go with me so I can capture those moments, instantly."

Then we are told of the "Comforts of a laptop, convenience of a 10” tablet".

Here Panos explained that "Surface Go is small and mighty, giving you the performance you need to be productive. A device powered by the 7th Generation Intel Pentium Gold Processor 4415Y, in a fanless design, offering up to nine hours of battery. Our team worked closely with Intel to optimise power, performance, and battery for the most critical tasks people perform every day.

"Being able to run Office apps on this device with its portability is one of the things that was critical to the experience we had in mind when we designed Surface Go – the productivity of having the apps you use for work and school with the flexibility to relax and read or watch a show on Netflix or Hulu.

"Our new Surface Go Signature Type Cover is custom-made for Surface Go integrating design features that give the user the best typing experience possible, with ergonomic key pitch and exceptional key travel. It also has high precision tuning and Windows Precision Trackpad that supports five-point multi-finger gestures, and you can connect the new Surface Mobile Mouse to work the way that you want.

"A built-in kickstand with full friction hinge that extends to 165 degrees helps you stay in your flow from tablet to studio mode, and a Windows Hello camera allows for familiar, quick, and secure sign-in using face recognition.

"Surface Go also has the ports you need, including Surface Connect for charging and docking; USB-C 3.1 for data, video, and charging; a headphone jack; and a MicroSD card reader for storage expansion. All designed to help you be more productive whether you’re studying in a library, working on a plane, or sharing your content in a boardroom on a 4K monitor."

Then we are asked, "Where do you want to Go?", with the word "today" left off so we presumably don't confuse it with Microsoft's slogan of the mid-90s, while cheekily referring to it.

Here we're told that "Surface Go with Wi-Fi will be available for pre-order tomorrow, July 10 in select countries, with products beginning to hit shelves on August 2 in the US, and August 28 in Australia and New Zealand".

An LTE (4G) model will also be arriving later this year.

Panos said that "For a family at home or on the move, an expert on the front line of a business interacting with customers, or a school that wants to provide its students with the most versatile tools for learning, this device offers a premium experience with incredible value.

"Wherever the day takes you, and whatever unique tasks await you along the way, Surface Go moves with you."

Here are the countries that can pre-order a Surface Go from 10 July.

In the coming weeks, Surface Go will be available for pre-order in Japan, Singapore, South Korea, Taiwan, Malaysia, Thailand, Hong Kong, and in China with more markets to follow.

Panos promises that you can "learn more" by joining Microsoft at its Facebook page at 6AM PT on 10 July, which is 11am AEST on 11 July 11 in Sydney. 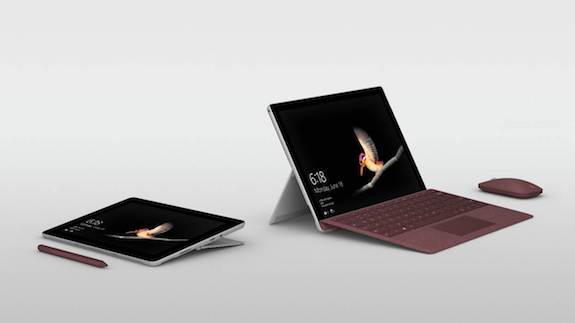 More in this category: « Paragon launches free APFS to HFS+ converter for Macs Paragon releases 'Backup & Recovery Free' for Windows PCs »
Share News tips for the iTWire Journalists? Your tip will be anonymous