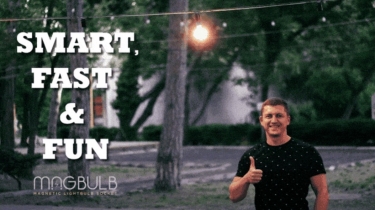 Having troubles screwing in a lightbulb sounds like a first-world problem, but depending on your light fittings, the flexibility of your hands and fingers coupled with your age and arthritic status, and more, and Magbulb is one of those great little ideas you wonder why no-one else has yet thought of in the 140-plus years of modern lightbulbs!

In the US, the Edison screw attached to the end of light bulbs has been around for well over a century, and it has been a truly timeless design - so much so that aside from the Bayonet Cap attachment more common in Australia (although we have Edison screw lamps and fittings here too) - very little has changed with the way that traditional light bulbs attach to their sockets.

Thankfully, however, we now live in the 21st century, and in the era of crowdfunding campaigns that have sparked an incredibly inventive spirit, one that is only set to grow exponentially into the 2020s and beyond.

The latest and greatest idea to spark a light bulb of innovation above the heads of Magbulb's creators is the Magbulb itself - a world first magnetic light bulb socket, which attaches inside your light socket and separately to the base of any standard Edison light bulb - and yes, Bayonet Cap Magbulbs are coming in the future, too.

You can see the Magbulb site here and the Kickstarter Page here which notes the campaign ends on Sunday January 12, 2020, with the Magbulb page giving a great explanation in text and animated imagery on how the Magbulb works, and why it makes it so damn easy to change lightbulbs in a way that we can all instantly understand - and immediately want!

Now, before I go into more detail, here's a video that shows Magbulb in action:

Magbulb is a plastic adapter that consists of two parts. One part is screwed into the lamp holder, using the standard Edison screw-in mount, instead of a light bulb as you’d normally be doing, and you only need to do this once. The other part is simply attached to any Edison-screw compatible light bulb like a magnet.

We're told that "the product is made of fireproof, non-combustible plastic and is compatible with all E26\27 bulbs and sockets globally. Magbulb uses heat-resistant neodymium magnets with an increased operating temperature range and a constant magnetic field."

This makes Magbulb a revolutionary improvement that will make a genuine difference to the lives of millions, if not billions around the world. No more do you need to use both hands to change a bulb: one hand to unscrew, and the other to steady the base of the holder.

No more do you need to balance on top of a high ladder, where things can get so “screwed” up that safety can levels drop - significantly.

After all, according to the U.S. Centers for Disease Control and Prevention, more than 200,000 cases were reported in 2016 alone, citing incidents with people on ladders, which resulted in 5% death, 30% serious injuries and 65% medical care – much of which could have been preventable with Magbulb.

Indeed, I personally know of an electrician who managed to fall off a ladder when changing a bulb, breaking his ankle in the process, going through months of healing, and despite ultimately regaining mobility, never quite having the same use of his leg again.

Magbulb provides an obvious level of safety never seen before in the simple act of changing a light bulb. What once took minutes in removing and adding in a light bulb can now take a second.

Magbulb itself notes: "“It’s been 141 years since Thomas Edison made one of the most significant inventions of the 19th century. Since then, humanity has made many more breakthroughs and advancements, but somehow, we did not progress much on changing light bulbs. Now, MagBulb involves science to make things easier on a daily basis, and we are shining the light on a brilliant new and affordable new way to re-light up your life”.

The Magbulb website shows you the light on just how easy Magbulb is to use, and why you’ll want a set of Magbulbs in your home, office, garage and everywhere.

For prices between 20 to 40% off what retail prices will ultimately be, the Magbulb Kickstarter site, which has already raised AUD $32,521 of the original $7245 goal, shines a light on the deals available, which start with an "early bird" 3 x Magbulb page at US $38 or about AUD $56.

Pries go down with larger packs purchased, with shipping estimated to be in April 2020, and shipping "anywhere in the world".

As always, crowdfunding websites need to come with the caveat that they don't always work out, with Magbulb itself listing the following for its "risks and challenges section" below. English is obviously not their first language, but you can clearly understand what Magbulb's creators are sayinghL:

"Our team believes that Magbulb is a real game changer for an old, monotonous, tedious task. We work on this idea for a 3 years and finally find an angel investor that helped with first step in production and now we have much more chances to win.

"Hope, you will support us and we'll do it together. The future of this product is in your hands. We are a highly experienced team in product launching and marketing, so we hope to make this campaign the next successful one in our portfolio.

"From our previous Kickstarter campaigns, we've learned to be ready for any kind of situation. We understand that timing is important, and we believe that our experience with previous campaigns will help us get your product shipped to you on time."

So, I can personally make no guarantees and am not part of the project. I was alerted to the campaign and simply thought - what a great idea! It's something I will definitely want to get for my home when the Bayonet Cap version arrives, but with billions around the world using Edison Screw bulbs, changing the lightbulb so you can see the light has never been easier - or more illuminating!