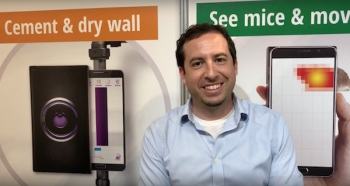 Vastly better than a stud-finder on steroids, this app-connected hardware device lets you see through walls to detect pipes, wood, wiring, even mice, with its parent tech used in medicine to see into people.

WalabotDIY is an incredible home renovation technology that gives you visibility behind walls in a way that was only ever possible in the realms of science fiction.

As per usual, science fiction turns into science fact on a daily basis in our rapidly technologically evolving and enhanced civilisation, with the sensors built into WalabotDIY part of a much larger and even more interesting story.

Vayyar Imaging is the 3D-imaging sensor company whose technology makes it possible to see through objects, liquids, and materials and, after having won some impressive awards over the last two years, it has finally released WalabotDIY is for Australian consumers.

Created especially for home renovators and DIY enthusiasts, we saw at a demonstration (embedded below in a video) how "WalabotDIY gives users ‘Superman-vision’ to see up to 10 centimetres into drywall, cement and other materials and determine the location of studs, pipes, wires, and moving rodents".

Available at a time limited launch special for $165, which is still available from the WalabotDIY website, the price will revert later this year to its RRP of $220.

At the Australian launch, WalabotDIY includes a new feature called Pan Mode, "which significantly enhances its capabilities by allowing users to scan an entire wall and combine everything detected into a single image and see a ‘map’ of what’s behind their walls".

With this feature, users "can detect multiple studs, pipes and wires, follow the path of pipes and get a full picture of things that are hidden from view".

You'll see the feature in action in this company-made promo video just below.

My video interview with Vayyar Imaging's director of Marketing, Malcolm Berman is a little further below, and after that, a demo I filmed of the WalabotDIY stand demo at the free Sydney Home Show at Olympic Park, on this weekend 27 to 29 October, is at the end of this article.

You can claim free entry with an email containing a QR code emailed to you for quick and easy scanning at entry, or you can sign in free when you get there, but better and quicker to register online at the show's home page here.

Here's my video interview with Berman at the WalabotDIY stand at the Sydney Home Show:

Raviv Melamed, chief executive and co-founder of Vayyar Imaging, said: “We were keen to launch to markets that are passionate about DIY and home renovating.

"Walabot introduces a new experience to Australians who want to renovate their house and knock down or cut into walls without making needless mistakes.”

So, how does WalabotDIY work?

WalabotDIY is "compatible with all Android smartphones 5.0 and higher, equipped with USB OTG, and connects to the back of the phone and can be used to scan the wall".

"Additional features include an adjustable sensitivity setting for optimal calibrations on particular renovation and construction projects, three sensing modes and the ability to seamlessly snap photo screenshots for use in offline analysis.

"Vayyar’s powerful sensor technology will also enable added features for WalabotDIY in the future and will integrate seamlessly with the existing WalabotDIY tool as they are announced and released."

As noted, the story of Vayyar Imaging is very interesting, too, as it is the company "changing the imaging and sensing market with its breakthrough 3D imaging technology".

The company's advanced sensors "quickly and easily look into objects, analyse the makeup of materials and track changes and movements – bringing highly sophisticated imaging capabilities to your fingertips".

The company says its goal "is to help people worldwide improve their health, safety, and quality of life using mobile, low-cost, and safe 3D imaging sensors".

Indeed, in the video interview with Berman, embedded above, he explained some of the technology's medical applications, including scanning people to help see inside of them, which is yet another sign that the Star Trek-like tricorder is at long last coming becoming real.

Another example of this comes from an article I wrote only two days ago at time of publication, in a article dated 26 October entitled: "VIDEO Interview: G Medical Innovations brings 21st century 'tricorder' to life."

My video of the WalabotDIY demo is below, but you'll also find plenty more video at Walabot's YouTube page here, with a selection of great short videos stretching back up to two years, and more than half a dozen from within the last month to three months, and more than a dozen from the last year, all worth watching to see how clearly, easily and effectively WalabotDIY works.

We're told that Vayyar’s award-winning technology is "currently being used by top Fortune 500 companies and has expanded into multiple industry sectors, including construction/DIY, Smart Home applications, agriculture, robotics, AR and VR, automotive, personal health and IoT", which is a pretty impressive demonstration of Vayyar's sensor technologies!

Finally, here's the demo that Malcolm Berman gave me of the WalabotDIY in action after our video interview:

More in this category: « Audiofly takes off with new locally-designed wireless Bluetooth headphones Still avoiding Apple Pay, Westpac rolls out PayWear Essentials this December »
Share News tips for the iTWire Journalists? Your tip will be anonymous