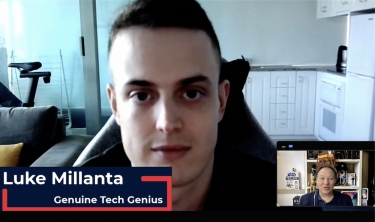 Unless you're an expert in the dark web, or want to trawl through its dark corners and endless forums where stolen credentials are sold and swapped, along with ads for suspect COVID-19 vaccines, illegal drugs and more, how does a company large or small find out if they're being talked about on the dark web?

Google doesn't search the dark web, and while the DuckDuckGo search engine is reported to search some dark web sites, it's not a complete tool.

An article from OSIntCombine explains the best ways to do that, including using VPNs and virtual machines, and it has a list of dark web search engines, including Ahmia, Candle, Haystack, TOR66, TORCH, OnionLand, Kilos, NotEvil, Phobos and Quo.

The OsIntCombine article also notes there is more than one dark web. Many would have heard of TOR, which stands for The Onion Router, but there is also Zeronet, I2P and Freenet, and there are presumably others, too.

This article from Norton also explains the differences between the Deep Web - which is results from databases like at libraries or internally at companies that Google generally doesn't search, but which are available for the public to search through via various websites that contain the info, as opposed to the dark web, with both OSIntCombine and Norton explaining the risks and dangers of trawling the dark web for info, and the things you might see that you wish you hadn't.

So, isn't there an easier way to simply be alerted to information landing on the dark web concerning you or your business that you might want to know about?

This is where Luke Millanta comes in, who we last wrote about earlier this year in recognition of his Guinness World Record achievement, and who joins me for a great chat in our video interview embedded below.

Millanta has launched a new service called AlerTor, which lets you track illegal activity on the dark web, receive alerts when you or the search terms of your choice are mentioned, and track some user activity.

You'll need to set up a free account to get access, but once you do, you can be alerted for the keywords you select. AlterTor allows for the indexing of Onion Services and may assist in tracking illegal activity across the Tor network - and you don't need to be connected to the dark web to be doing this.

Millanta explains that AlerTor can be used in a number of different ways:

For example, if you wanted to know when someone was writing about your business and what they were saying, you would set up AlerTor to notify you whenever your businesses’ name was mentioned in conversation on the dark web. Notifications are sent to your email.

When you look at the AlerTor site, you can see that it looks very basic, with very simple functionality. You create a free account if you don't already have one, entering in a username, a password and the email address you'd like to receive alerts to.

You then log in, and you enter in the words or information you wish to be alerted about, and then you wait for alerts to arrive in your inbox.

For now, that's it, the site looks more like a version 0.1 beta than a whiz-bang version 3.0 do-it-all disruptive web service that's going to take over the world, but hey, that's what happens when you hack something together over a weekend, as Luke explains he did. Function over style.

AlerTor is free, and will remain so, with Millanta stating that he has no plans to monetise the service in the future. He will instead be treating AlerTor as yet another of his hobbies, which in the past have included mapping the location of Tor relay servers, and configuring his Amazon Echo to remotely control his Tesla Model S – eight months before the world’s first commercially available in-car Alexa system, the Garmin Speak, appeared on the market.

Millanta explains AlerTor's code is being made public, so if anyone out there wants to use and build upon it, anyone is welcome to do just that

So, we decided to learn more from Luke Millanta, and he joined us for a video interview on AlerTor, but also about creating gaming content, the Guinness World Record, being a CTO, the Dark Web and plenty more - the article continues thereafter, please read on.

Here's a summary of the topics we spoke about:

I started by introducing Luke and his impressive background, and welcoming him to the program.

My question question is one I normally save for much later in the interview, but with Luke I was curious to know right away, and asked him about his first computer and the first game he remembers playing.

I then asked whether Luke's parents ever nagged him to stop playing games on the computer, given they would have been completely unaware that one day the world of gaming would enable him to become a millionaire.

This led to the Guinness World Record itself - how Luke was able to earn it, the business of creating gaming content and monetising it successfully, and when Luke realised he could sell his digital creations and make it a real business.

When then spoke about the dark web and when Luke started hearing about it and exploring it, and when he realised that creating an alerting tool would be a great idea.

I wanted to know if Luke had already found mentioned to himself, Hive Gaming and other information you're tracking through AlerTor pop up in his emails, and if so, what it was about.

We discussed whether AlerTor exclusively searches Tor networks at the moment or if it works work on others such as Freenet.

I wanted to know how Luke was searching the dark web, and why someone like Google doesn't search the dark web that we know of, and whether dark web searching engines like DarkSearch.IO do a similar thing to AlerTor, or not.

We spoke about the potential to commercialise AlerTor and whether that was, or wasn't, part of future plans.

I asked what Luke was working on next, if he could tell us without giving anything secret away, and we then spoke about how Hive Gaming is going and what Luke's job as CTO entails.

Luke then shared great advice he has received in life, and finished with his final message for iTWire viewers and readers, and for his current and future customers and partners.

So, please take a look at our video interview above to learn more from Luke, who is a genuine Australian tech genius we're sure to hear much more from in the months, years and decades to come!

More in this category: « HP launches Australia’s first at-home ink subscription service so you never run out of ink again Apple's Spring Loaded event: a MUST-WATCH masterclass in technology »
Share News tips for the iTWire Journalists? Your tip will be anonymous