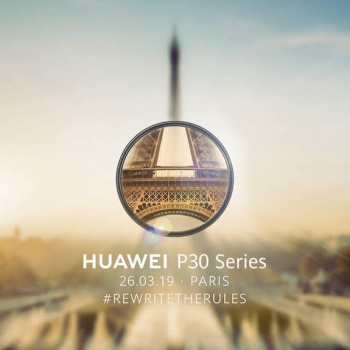 With Samsung due to launch its new S10 phones within the next 24 hours, its biggest Chinese challenger, Huawei, has reminded the world its new P30 range launches in just over a month.

Huawei has been making waves in 2018 and now 2019, not only with its impressive P20 and Mate 20 series phones, but also with Western governments who are worried about the influence of the Chinese Government on Huawei's management and its technologies.

Of late, the specific technologies governments are most concerned about are 5G technologies, which Huawei is one of the big telco equipment manufacturers working hard to bring to life.

Despite Huawei's troubles with various Western governments, the company still has the 1.4 billion population of China itself to sell to, as well as Chinese telcos, and there are dozens if not hundreds of countries with telcos and customers to whom that Huawei can still market its products and services.

The world is also yet to see whether Chinese President Xi Jinping and US President Doinald Trump will come to some kind of deal over Huawei as was the case with ZTE, but none of this has stopped Huawei from continuing to craft advanced smartphones with features that take the challenge right up to and beyond Apple, Samsung and others.

Indeed, one of my colleagues at iTWire wrote about the Huawei P20 Pro in June 2018 in an article entitled "Huawei P20 Pro review: Best phone of 2018?".

Likewise, I wrote about the Mate 20 Pro in October last year in an article entitled: "Huawei's new Mate 20 Pro: arguably the best smartphone in the world late 2018, plus MUST-SEE keynote."

Now comes the P30 Pro, which renders and leaks online suggest comes with a whopping four rear cameras, rather than the three seen on the P20 Pro and Mate 20 Pro, and which enables more photographic options than ever.

Huawei also featured its ultra wide photography and videography last year, which allows you to take very wide photos and videos so you don't have to stand further back just to squeeze everyone in.

It's an excellent feature that is very, very handy.

There are also features like huge battery capacities, reverse wireless charging and much more from the Mate 20 Pro range that competitors are slated to introduce this year.

Another major feature is massive zoom, which Huawei has teased in its P30 video, which you can see below, and which announces that Huawei will unveil its new P30 range in Paris on March 26, 2019 - with the hashtag #rewritetherules.

More on all of the new phones in 2019 as the information comes to hand!

More in this category: « VIDEO: Telstra launches 3rd-gen Telstra TV with volume buttons, voice control and no lock-in broadband MUST-SEE Keynote: Samsung wants launch to bring more customers into the 'Fold' »
Share News tips for the iTWire Journalists? Your tip will be anonymous