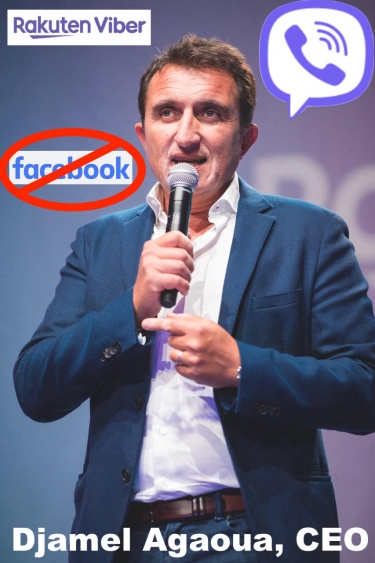 In what is a clever marketing ploy for the Viber messaging, voice and video calling app, its CEO is making an appeal to Australians to use its services, with Viber stating it cut all business ties with Facebook back in June 2020.

It has an app for iPhones, Androids, has a desktop version for PCs and Macs, and is even in the Huawei App Gallery for Huawei's smartphones.

It has been available since December 2010, and was purchased by Rakuten back in 2014, with the company's CEO, Djamel Agaoua, making a pitch for Australians to use its service, sweetened with the promise of end-to-end encrypted calls and chats, and a reminder that it stopped doing business with Facebook completely in June 2020.

But with Facebook taking extremely heavy handed action in an attempt to stave off similar government action to that Australia is proposing from governments around the world, in what was obviously a warning to all, the reaction has been swift and fierce, and competitors have been ready to pounce!

That includes Rakuten Viber, whose media release notes that "The Australian people recently discovered that Facebook blocked access to a handful of news sources, as well as providers of information about vaccines. The Bureau of Meteorology, state health departments, the Western Australian opposition leader, medical organisations, and charities are among those to have been hit by Facebook’s ban on news in Australia to prove a point to the Australian government.

"In response to recent events, Rakuten Viber, the company behind one of the world’s leading apps for free and easy communication, announced it will not retaliate against users over a disagreement on government policy. Publishers of any kind and public organisations are welcome to share news content and important information on its platform, allowing Australian audiences to keep viewing and sharing content from Australian and international trusted news sources."

Djamel Agaoua, CEO of Rakuten Viber said: "Viber is proud to welcome Australian users and publishers to share news, links, and important stories on the app. We invite all of those outlets whose accounts were shut down by Facebook to open a community on Viber.

"During times when reliable information from trusted sources is crucial, Viber is free and open to all. Having access to factual, up-to-date information can make a difference in people’s lives,” says

Viber reminds us that "since 2010 Viber has been leading the charge when it comes to social responsibility, by creating a safe, fun and informative experience for its users through chats, groups, and communities.

"As part of its role in protecting users’ data, in June 2020, Viber announced that it cut all business ties with Facebook. No user information (users’ phone numbers or personal data) is, or will be, shared with Facebook or its ecosystem.

"As part of its social responsibility strategy, Viber has a long-term engagement with WHO. ast year the two collaborated to fight against misinformation around COVID-19 with an interactive, multi-language, global chatbot. The bot aims to combat fake news and false information that has been circulating about the virus. It addresses the most commonly asked questions and latest news developments related to the pandemic from official health information sources.

"Being one of the top five messengers in the world, Viber offers both publishers and users a way to connect and enjoy content through enhanced user experience, following the top protocols for users data privacy and encryption.

"Back in 2018, Viber was the world’s first messaging app to offer public communities with an unlimited number of followers. This is a great way to interact at scale and can be used to share real time news, important updates, and keep people connected, especially during the time of a pandemic. Communities on Viber encourage safe chats, keep members’ data private, and allow admins to moderate the discussions to maintain a safe and authentic space."

So, whether any of this convinces you to give Viber a try is up to you, it's clearly a very capable messaging platform and boasts over a billion users, but perhaps Viber needs to create its own Facebook-style social media platform, too.

It clearly has the resources to do so, and naturally, it would be intertwined and interlinked with the existing Viber services.

Until then, it's another messaging service that has grown and matured over the last decade, so if you haven't already given it a go, Viber hopes you'll get the vibe, feel the vibe, and join the tribe!

More in this category: « Redesigned 2021 Huawei Sound speaker with Devialet: 'distinctly smaller' with 'superior sound' MoodOff Day: Turn off your phone for 5 hours to raise awareness of smartphone addiction on Feb 28 »
Share News tips for the iTWire Journalists? Your tip will be anonymous