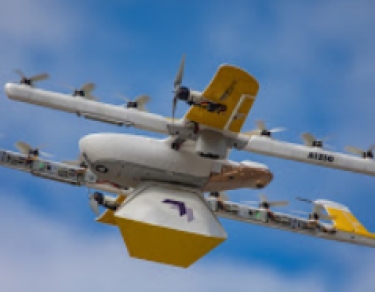 Wurst, it's likely to be the greatest sausage-fest ever.

Getting back to the news. Sorry…

On Saturday, October 17th, the ACT goes to the polls to elect a new territory legislature. No surprise, this event happens every few years. The twist this time around is our good (?) friend COVID-19.

Clearly, the 'democracy sausage' is in peril. If they can't attend the school-based polling booths, how will voters get their requisite allocation of bread with meat flavouring (coated with either brown, red or yellow fluid), all served in a dubious slice of what might actually be bread (with optional over-cooked onions).

Enter Wing, a subsidiary of Alphabet (you know, the Google people) who will use their fleet of drones to fly the complete sausage article directly to the voter's home. Temperature guarantee not included, of course.

…and there we were thinking that there were already far too many drones in politics. But, we digress. Somewhat…

In conjunction with The Spence Grocer and Kickstart Expresso (who clearly don't understand that 'espresso' doesn't need to be spelled with the letter 'x'), Wing will be air-lifting tubular packages of joy (wrapped in a satisfying bed of spongy whiteness) to all who wish to imbibe. For a small fee, of course.

According to Madison Groom, City Manager, ACT, Wing, "It's ACT election day this Saturday [October 17th], and while many Canberrans may have been looking forward to enjoying a democracy sausage at their local polling booth this weekend, sausage sizzles across ACT hit a bit of a snag due to COVID-19 restrictions.

"With many voters pre-polling this year to avoid crowds at the booth, and some school P&Cs deciding to adapt or cancel their usual fundraising BBQs - we didn't want Canberrans to miss out on the uniquely Australian election day tradition.

"We're teaming up with two of the local businesses [already] delivering with Wing, The Spence Grocer and Kickstart Expresso, so customers can order their democracy sausage on election day and have it delivered to their home by drone. Wing will match all democracy sausage sales made on Saturday with a dollar for dollar donation to the Palmerston District Primary School Parent & Citizens Association e-sausage online fundraiser. [iTWire: whoo-hoo: a free drone with every sausage… where's my butterfly net?].

"Palmerston District Primary School P&C were forced to cancel their planned election day sausage sizzle this year due to COVID-19, which was going to help raise funds to enhance the school's playground spaces. When we heard they had been impacted, and had to move their fundraising online, we wanted to help!"

Kate Baron, Assistant Secretary, Palmerston District Primary School Parents and Citizens Association added, ""We decided to cancel our planned election day sausage sizzle when school parents and citizens groups were discouraged from hosting fundraisers near voting locations. While the ban has since been lifted, and some restrictions eased, Palmerston District Primary School P&C has decided to move our fundraising online.

"We were delighted when Wing got in touch to see if they could help with our virtual democracy sausage fundraiser and support our local school. Getting a democracy sausage delivered by drone is certainly a first, and we're grateful for the support of the wider Gungahlin community. Our school fundraising initiatives are a way of bringing the broader community together, while raising needed funds for school projects."

iTWire commends this event as an interesting re-take of the typical fund-raiser, but struggles to know who (exactly) will want to make use of the service.

Perhaps Groom disagrees when she adds, "We expect our customers will get a kick out of having their democracy sausage delivered by drone, and will really get behind supporting this worthy cause."

"Your sausage may vary," as they say.

More in this category: « WhistleOut says 'Money no object for iPhone 12 fans' Belkin's new iPhone 12 MagSafe Wireless Charging Accessories get a Boost and use the Force! »
Share News tips for the iTWire Journalists? Your tip will be anonymous