The home assistant battles have begun 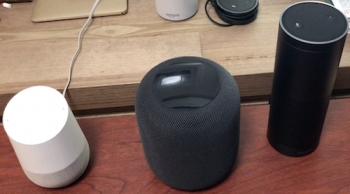 Apple’s HomePod has now made its worldwide debut. It joins Google Home and Amazon’s Alexa-powered range of Echo devices in the battle for home assistant (and wallet). Which one is best for you? iTWire has begun to investigate.

In Australia, Google’s Home has been available for some time, while Amazon’s Alexa devices — the Echo, Echo Dot and Echo Plus — were only released this month, finally bringing Antipodeans in line with their US brethren. Meanwhile, today — 9 February — saw the global release of Apple’s Siri-powered HomePod.

Today marks the first time — in any country — that all three home assistants are available, whether in the US, Australia or others, and no doubt the big question for many is, which one?

iTWire will be putting the devices through their paces this weekend. However, despite the commonality, some stark differences have already come to light.

Most notably, which one plays music the best? Google and Amazon both offer rich, room-scale audio, while Apple has promised the highest-fidelity audio, with quality engineered sound, and arrays of microphones and tweeters. The claims are extensive, and iTWire can report that when hearing the three devices in one room, there is truly no comparison. Apple leaves the competition behind when it comes to audio quality.

Note: it’s sadly possible that when you try to watch this video, it may not be available. YouTube’s bots removed it claiming it infringed copyright because of the 30-second audio clip being compared across devices. I filed a dispute and trust it will be resolved, or I will re-record and replace this video with different music. However, the very interesting thing is YouTube’s bot claims it is only the Apple HomePod version of the audio which was sufficiently recognisable and clear enough to infringe copyright.

Still, not everything comes up Siri. It seems Apple forgot to imbue Siri with personality. Who tells the best jokes? Siri doesn’t know any, while Google’s Assistant and Amazon’s Alexa both tie for the groaningly awful dad joke of the year.

It’s not all disharmony. What do these home assistants think of each other? Again, Siri lacks personality, while the others think they’re all best buddies.

Want more detail on the differences between each home assistant? Read my story here, to pick which one is best for you.

More in this category: « Frame-changer: Samsung extends lifestyle TV range with new 43-incher Which home assistant is right for you? »
Share News tips for the iTWire Journalists? Your tip will be anonymous