The Force is with Sonos and Disney+, bringing 'cinema-quality sound' to homes for 'The Mandalorian' 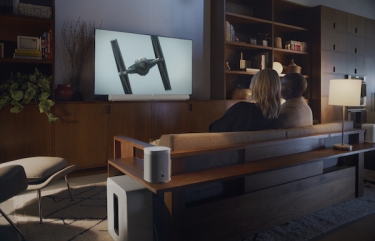 The stunningly awesome Disney+ show "The Mandalorian" arrives at the end of October, and Sonos not only wants to promote its ARC soundbar as the ideal way to implant sonically awesome audio into your brain through your ears but also to promote a special new curated Sonos radio station called "Things That Stuck".

If there's one thing in the entire universe that doesn't suck, it's The Mandalorian. Everyone fell in love with Baby Yoda and the Mandalorian's devotion to keeping the little fella safe, as Baby Yoda helped save the Mandalorian on more than one occasion, too.

Now Sonos has joined the excitement as it bills itself as "the world’s leading sound experience company" with its Disney+ collaboration, as both kick-off what they call "a multifaceted strategic marketing campaign".

Together, we're told, "the two brands will celebrate the widely-anticipated premiere of the second season of The Mandalorian on October 30 [US time] and explore the series’ immersive sound design and original score, promoting premium products and services for their shared fans around the world.

The innovative marketing campaign both speak of starts with a YouTube video "elevating the iconic sounds of The Mandalorian" where we get to hear "a TIE Fighter zooming through the air, the Mandalorian blasting through the galaxy, and the powerful hook of Ludwig Göransson’s composed score", with Göransson being "the award-winning composer of the series".

Here's that video - the article continues thereafter, please read on!

Pete Pedersen, VP of Marketing at Sonos said: "As we spend more time at home, our living rooms have become the hub of entertainment for album releases, season premieres, and straight-to-streaming blockbuster debuts.

“Our goal is to make it easy to enjoy all of your favourite music and streaming video content in better sound with Sonos. We are working with Disney+ to give fans an even more immersive experience for one of the best sounding shows streaming today".

Of course, there is more, with the aforementioned Ludwig Göransson who will "debut a personally curated station, 'Things That Stuck', on Sonos Radio, which is the streaming radio service in the Sonos app.

Sonos said that "Göransson has evolved and paid homage to the nostalgia and soul of the iconic Star Wars universe through his work on The Mandalorian.

"Going beyond the work on The Mandalorian, Tenet, and Black Panther", Sonos says "the station explores the music that informs the composer’s musical genius. Fans will enjoy hundreds of songs featuring Göransson’s latest obsessions and inspirations from jazz, classical, indie, hard rock, and film.

"The second season soundtrack from The Mandalorian will debut on "Things That Stuck" on Sonos Radio upon release alongside exclusive creator commentary from Göransson, giving fans behind-the-scenes access to the creation of the second season score".

In Ludwig’s words, "’Things That Stuck’ is a collection of songs and sounds that found their way into my hippocampus. Sharing my passion for music with my family and friends has been one of the greatest joys of my life. When you share an emotional bond with someone, your heart and eardrums swell up and makes you listen to music in a different way. Let's become friends.”

"Listeners can access the station on Sonos Radio in the Sonos App starting October 30 alongside the second season premiere of The Mandalorian on Disney+, available in all countries where Sonos’ original content is currently streaming".

About The Mandalorian Season 2:

The Mandalorian and the Child continue their journey, facing enemies and rallying allies as they make their way through a dangerous galaxy in the tumultuous era after the collapse of the Galactic Empire. “The Mandalorian” stars Pedro Pascal, Gina Carano, Carl Weathers and Giancarlo Esposito. Directors for the new season include Jon Favreau, Dave Filoni, Bryce Dallas Howard, Rick Famuyiwa, Carl Weathers, Peyton Reed and Robert Rodriguez.

More in this category: « Australia's second 'Huawei Experience Store' opens on 1 October in Sydney CBD NordVPN proudly boasts it's the best in independent VPN speed test »
Share News tips for the iTWire Journalists? Your tip will be anonymous