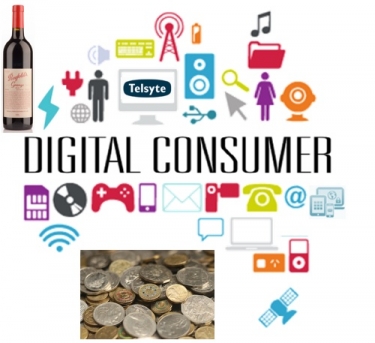 They say a change is as good as a holiday, but despite being a universal constant (and making your pockets very heavy), the last decade saw the most rapid change in our history - with the COVID-19 tinged decade we're currently in set to see change changing at the fastest pace yet.

While many would prefer Grange to change, Telsyte's first study produced after the COVID-19 pandemic showed the decade from 2010 to 2020 "witnessed the most rapid technology change in Australia’s history, with 21.6M smartphones now in use (up from 4.4 million in 2010) and people spending $14.4 billion on digital goods and services in 2020, up from $2.2 billion in 2010, according to new research by emerging technology analyst firm Telsyte."

We're told the Telsyte Australian Digital Consumer Study 2021 is "the first study produced after the COVID-19 pandemic, which catapulted the already accelerating adoption of home and personal technology products and services."

Published annually since 2008, the study has been providing insights and forecasts on the state of technology adoption, digital trends and changing consumer lifestyles as a result of advances in computer and communications technologies.

So, what does Telsyte have to say in its report, which it naturally hopes you'll be interested in purchasing?

A decade of rapid technology change

The study found the promise of a digital nation is on track with the rapid shift to online and digital services, enabled by mobile technologies and faster Internet services.

Thanks to the NBN and mobile broadband, Internet connectivity has vastly improved over the last decade and, according to the study, 30% of Australian homes are now on a 100Mbps or faster speed plans compared to 78% that were on ADSL plans with average speeds less than 15Mbps. The improved broadband speed plans enabled higher data usage with the average usage increasing by 793% from 28 gigabytes monthly usage in 2010 to 250 gigabytes in 2020.

Online shopping is no longer seen as just a discount channel, especially since the pandemic. The eCommerce market was worth $32.9 billion in 2020, almost triple in value from $11.5 billion in 2010.

The decade also gave rise to new digital goods and services, with the market grew by more than 6-fold from $2.2 billion in 2010 to $14.4 billion in 2020, driven by online entertainment and mobile applications. A standout in recent years has been digital video games, with the segment generating $3.4 billion in revenue in 2020 across digital games and extras, mobile as well games related subscriptions – growing from around $1 billion in 2015.

Interests in video entertainment also saw the number of streaming video on demand (SVOD) subscriptions grow more than 40-fold between 2014 and 2020, reaching more than 16 million services. Three in five (62%) Australian households were using at least one SVOD service at the end of 2020.

The start of the new decade saw a one in 100-year pandemic with the COVID-19 crisis. The pandemic encouraged Australians to adopt new technologies that will help them adapt to the changing environment. The study found 1 in 3 have learnt to use new technologies or online services during the pandemic.

Adoption of digital services was also influenced by the pandemic, with more than 7 million Australians now using online food delivery services and online grocery shopping – up 22% and 35% respectively from 2019. Telsyte estimates both will reach 8 million users by the end of 2021.

Telsyte found 42% are now more comfortable shopping online due to COVID-19 lockdown and restrictions and, despite the easing of lock down restrictions in 2021, 55% of Australians are prepared to spend more time at home, a strong driver for the housing and associated technology product markets. Nearly as many (46%) workers say they now prefer to work from home more often going forward.

Telsyte MD, Foad Fadaghi said: “During uncertain times, it was technology and communication services that improved home and work life for most Australians."

As a result of the post-pandemic home centricity, the average number of Internet connected devices in the home is on track to reach over 30 by the end of 2024, up from 19.7 at the end of 2020. Overall, the growth in connected home devices has been nearly 500% since 2010.

Trust remained important in the Australian society in 2020, especially during the pandemic when it came to media and government.

Some 1 in 3 Australians remained “Very Concerned” about “Fake News”, with nearly half now always checking the validity of the news source that they see online. The study also found trust in traditional news channels has improved since the pandemic and people are supportive of news outlets being reimbursed by search engines and social media platforms for their content.

Cybersecurity concerns are growing due to the rapid adoption of connected technologies and the shift to digital lifestyles. Nearly 30% of Australians experienced some form of cybercrime in 2020, including account hacks, phishing attempts, ransomware, identity theft, and cyberbullying.

The impact of COVID-19 on population growth could continue into the next two years; however, Telsyte believes Australians’ passion for technology will continue to underpin adoption and opportunities for new services, including:

Naturally, Telsyte hopes you'll find more than a few coins of change under the couch cushions to buy a subscription to its products and services, which includes its latest, 200-page, comprehensive "Australian Digital Consumer Study 2021."

The report provides subscribers with analyst content and services covering:

In preparing this study, Telsyte tells us it used:

More in this category: « Vodafone announces 'best price' on a plan with new iPhone offer Audio-Technica wireless headphones recalled »
Share News tips for the iTWire Journalists? Your tip will be anonymous