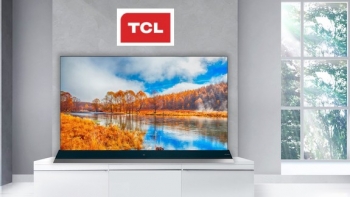 Although Sharp has been showcasing 8K capable TVs for some time, Samsung, LG and now TCL have taken the opportunity to show off 8K models they all hope you'll upgrade to from as early as 2019.

More specs are yet to come, which they presumably will soon enough, but its first and only 8K TV thus far is to be called the X10, while its X8 and Frame TV+ models are 4K models, and like Samsung and LG's new TVs are being displayed at IFA 2018, on now.

TCL bills itself as "one of the world’s largest leading top three panel manufacturers", and notes that X10 will "be making its way onto the shelves of Australian retailers in early 2019".

The question of content is obvious – there's supposed to be 8K content in Japan, but for the time being, 4K content will just have to be upscaled, but surely it won't be long before someone, presumably Netflix, movie studios and consumer electronics makers who will presumably want to create 8K Blu-ray Discs, will start offering "native" 8K content, but all of that has to happen first.

As for TCL's three new models, they all feature "in Alexa, Google Assistant, and the Android O operating system", with TCL station all three new models bring to life the company's "vision to make life more intelligent, using AI powered technologies paired with the latest developments in picture and sound".

"Our new models aim to enhance the experiences our customers crave, but also aim to prepare our customers for new developments in the market, such as the introduction of Google Assistant – which is yet to reach Aussie shores."

Then there is "TCL’s Art Design features is the Frame TV+, which showcases a unique frame that its screen fits into in an abstract way".

Carrick added: “Over the last few years we have had a strong focus on integrating our technology into the way we live – both from a user experience and home design perspective.

"Artificial intelligence is touching our lives in more ways than one, which is why TCL’s 2019 range will focus on AI T-Home, to continue to utilise developments in AI and drive a seamless connected life by connecting all smart home services.

"Australians can expect to be blown away by our 2019 range, there really is a model for everyone to enjoy a new level of entertainment and experience."

"Onkyo is set to feature prominently in TCL models, following TCL’s acquisition of the brand, as well as the Pioneer brand, earlier this year."

"More information including features and RRP prices of the new 2019 TCL Australia range will be released early next year."