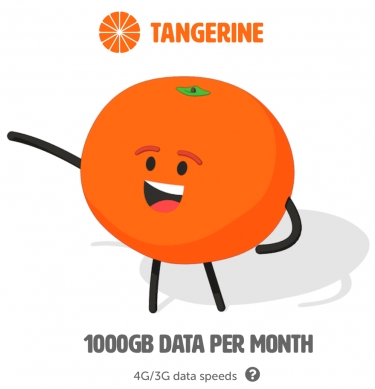 It's no tangerine dream but the rose coloured reality of a 4G wireless broadband plan with a 1000GB data plan for less than $100 per month.

Already offering 200GB and 500GB wireless broadband plans for $59.90 and $69.90 per month with no contract for the first six months each respectively, after which the price rises by $10 on each plan to $69.90 and $79.90 per month, Tangerine Telecom has arrived with what is says is a first.

The company, which proudly boasts of being a triple 2020 WhistleOut award winner for "best unlimited NBN provider", "best premium NBN provider" and "best fixed wireless NBN provider" has launched its 1000GB 3G/4G mobile broadband plan, which as with most if not all plans these days counts uploads and downloads in the data allocation.

The company states it is the first to offer 1000GB on a wireless mobile broadband plan, with a search of the Whistleout site confirming this, and the Finder site not yet updated to list Tangerine's 1000GB, or at least, at time of this article's publication.

He continued: “The demand for data is increasing exponentially so we see a real benefit for our customers in having the option of both unlimited data NBN plans plus the largest mobile broadband data plan in the market".

Operating on the Optus 4G Plus network, the plan costs $89.90 for the first 6 months and then $99.90 thereafter, but there is no lock-in contract with the plan on a month-by-month proposition.

“We also see customers enjoy this service in areas where they are covered by NBN fixed-wireless technology. This is where they may experience NBN tower congestion and have strong Optus mobile coverage,” Branson concluded.

The company re-iterates the plan is "no contract" meaning customers "can leave at any point with no penalty and there are options for BYO (bring your own device) or hardware is available on signing".

We're told that "Wireless broadband is an alternative to the NBN as it utilises the 4G mobile network and is great for people who want to take their internet connection with them - perhaps to a holiday house or office.

"It’s very simple to set up your wireless broadband connection and you don’t need a technician - so you’re up and running in minutes. It also works well for anyone where NBN may not be available but there is good mobile coverage."

For those who don't need the super fast full speed that an non speed-limited plan provides, Telstra provides an alternative with its mobile broadband plans. I've helped more than one person connect to Telstra's $15 per month no-contract plan, and while it only has 5GB of data at full speed, it is unlimited thereafter, but speed limited to 1.5Mbps upload and download speeds.

For someone with modest needs, this plan still allows you to surf all you want, and even though only at SD quality, to watch as YouTube, Netflix, Stan, Disney+, Amazon Prime and more that you want, as well as listen to as much online radio or to stream as much music as you desire.

One day Telstra will have to increase this plan to a higher speed limited cap, but clearly they're in no rush to do that. Telstra also has 20GB for $25 per month, 60GB for $50 per month and 200GB for $75 per month, although if you need more data than that and are in a good Optus coverage area, Tangerine's 1000GB plan is clearly appealing.

Whatever happens, the fight for the hearts, minds and wallets of customers continues, as does competition.

A friend was telling me of a 5G unlimited data plan for less than $50 Australian per month they were enjoying in Thailand, so there's definitely a long way to go in Australia to be as competitive as that, but the market takes the steps it needs on the journey to ever greater competition, and it's good to see Tangerine pushing the limits.

Tangerine Telecom states that it is "one of Australia’s most successful smaller NBN providers - privately owned with a head office in South Melbourne, [employing] 90 staff and is rapidly increasing its customer base - now standing at 70,000."

So, there you have it. A one terabyte mobile broadband plan is now on offer - who will follow next, when will Optus offering its own unlimited but speed capped plans, and when will any of the telcos move their 1.5Mbps speed caps to 3Mbps?

Until then, at least one tangerine dream is now a reality, but there's still plenty more science fiction yet to become science fact.

More in this category: « Robot Vacuum Reviews: Ecovacs Deebot OZMO 930 10m thinner-than-ever iPad Mini’s to ship in 2012? »
Share News tips for the iTWire Journalists? Your tip will be anonymous