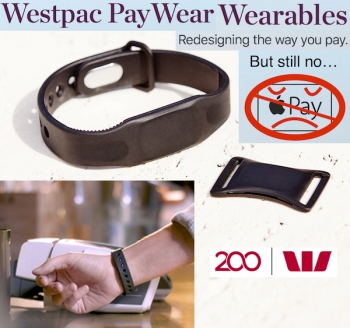 Westpac's PayWear delivers contactless microchip payments from your account, using a silicone wristband or a ‘keeper’ device that easily attaches to an existing watch or fitness band.

Although Westpac, Commonwealth Bank, National Australia Bank and smaller banks like Bendigo Bank are still holding out on their iPhone owning customers by denying them Apple Pay usage, despite ANZ and various credit unions and various AMEX and other credit cards finally getting on board the Apple Pay train, banks are still engaging in a range of contactless payment technologies.

Samsung has had great success in getting many more banks and financial institutions on board, as has been covered in iTWire recently, while Google Pay, FitBit Pay and other payment systems are out there, too.

And c'mon, you can even do eftpos by wearable these days, albeit only for ANZ customers via Apple Pay using an iPhone or Apple Watch, but it works, so Apple users who haven't already made the switch to ANZ are still impatiently waiting for Australian banks to let those who wish to use Apple Pay just start using it, and let anyone else who wants to use Android Pay or Samsung Pay or Fitbit Pay or Unipay or WhatsApp/WeChat pay or any other kind of pay, to pay their way as they wish to pay it!

So, what Westpac's PayWear does instead is to be a new wearable payment technology that will "allow customers to make contactless payments with either a silicone wristband or ‘keeper’, which can be easily attached to an existing watch or fitness band, via a microchip linked to the customer’s everyday transaction account".

It's not specifically mentioned if you can attach PayWear via the 'keeper to an Apple Watch, and nor would you expect Westpac to do so, but if you can, avoids the problem of needing to wear both smartwatch and PayWear as separate bands. It will be interesting to see how well the keeper device works. 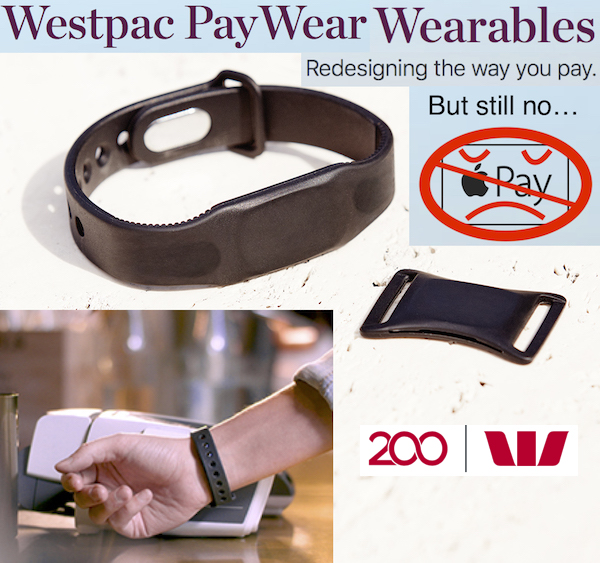 As you'd expect, Westpac explained that "Customers can tap and pay in the same way they regularly do with their debit card, without having to reach for their wallet or smartphone, through the new range of waterproof and battery-free wearable accessories."

However, this makes me wonder if someone could tap a (admittedly obvious) payment terminal to your wrist with a pre-set amount of say $99 tapped your wrist and whether that would go through, or not, without requiring a pin code.

Perhaps some hacker will find a way to program an NFC-enabled smartphone with such an app to harvest payment data and approvals, and then somehow hide the flow of money so as not to be so easily tracked. End-users would only notice when they checked their online accounts and saw amounts between $1 and $99 being taken out to some random account that could presumably be faked to state Woolworths or Coles or 7-Eleven or a service station etc.

No doubt the banks are well aware of such possibilities are prepared for any such attack, because as always, many consumers prefer convenience over security.

This is especially so in today's modern world, where instant gratification isn't, at least for some people, instant enough.

We see the positive side of this as Westpac Group chief executive, Consumer Bank, George Frazis, explained that "customers across the country embrace greater convenience and expect to be able to simply tap-and-pay.

“Australia has the highest contactless penetration in the world, and cards continue to replace cash as consumers demand convenience. We’re always looking for new ways to help make our customers’ lives easier, and with our new PayWear products, customers will be able to pay on-the-go, in one hands-free step.

“With PayWear, there is no need to search through a bag, login to an app or worry about battery life. It will be on the go with our customers and ready for use when they are.

“When speaking with customers, personal style and choice were important. In fact, 70% agreed that they would only wear a wearable device if it suited their own personal style and lifestyle. This is why we will collaborate with iconic Australian designers to create a variety of wearable accessory designs to suit different tastes, preferences and styles.”

PayWear Essentials will be available in early December, with Westpac "also partnering with Australian designers to create a PayWear Designer range launching early next year."

Award-winning surfboard shaper and entrepreneur, Hayden Cox of Haydenshapes, is the first Australian designer to be announced, and he will design a range of unique products for Westpac PayWear. Here he is with PayWear being worn. 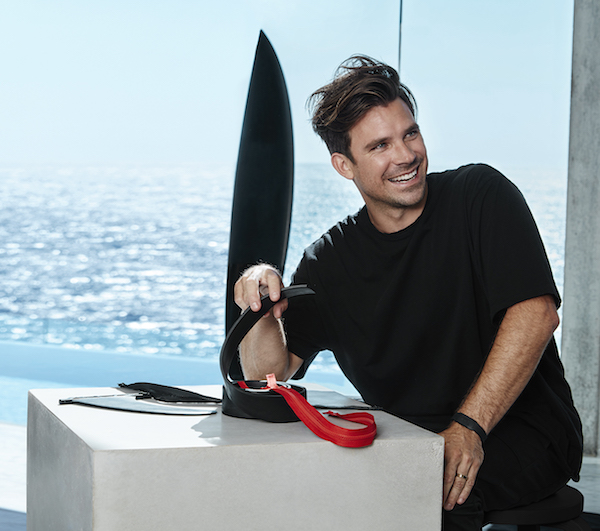 A range of leading Australian designers will be hand-picked to speak to a wide mix of everyday Australians - from surfers and fitness fanatics, to busy parents, professionals and festival-goers.

Cox says the opportunity to collaborate with Westpac has been a natural fit when it comes to designing products that are innovative, functional and stylish.

“Functional design is something I’ve always been passionate about – particularly technology and products that improve experiences for people. It was this passion which led me to creating and filing a patent on my parabolic carbon fibre surfboard construction, FutureFlex, and wanting to uniquely design my product to improve the surfing experience.

“Working with Westpac to create an exclusive range of wearable accessories which evolve the way people make contactless payments is exciting to me. This product signals an inevitable and innovative progression of our everyday routines. While some customers may opt for the simpler Essentials range, there is also a part of the market that will want something with a little more flavour. This is where the products I’m designing will sit.” 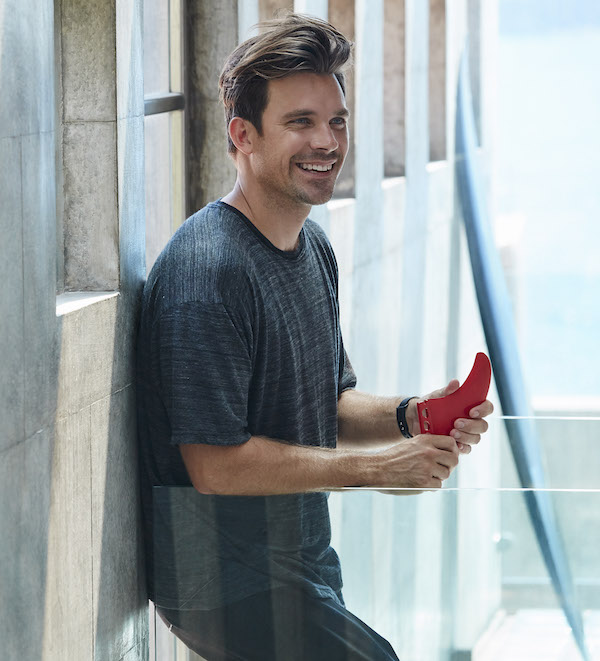 Westpac tells us that all of its customers "with an everyday banking account eligible for a Debit Mastercard will be able to order a PayWear Card online via Westpac Live, which can be inserted into the PayWear accessory of their choice. The PayWear Essentials range of wristband and keeper will be available from December. The Designer range is due to be available to customers in early 2018".

Naturally, Westpac customers will be able to use PayWear to make purchases on all contactless-enabled terminals – otherwise there'd be no point to using it.

Frazis concluded, seemingly taking a dig at smartwatches and other payment enable fitness wearables by stating: “Unlike many other wearable payment options, our customers don’t require an expensive device to access this technology. Customers will be able to get a PayWear Essentials accessory free of charge for a limited time, making it accessible to all our everyday banking customers.

Westpac proudly boasts "the announcement of PayWear builds on the Westpac Group’s strong history of digital innovation, as the first to introduce internet banking to Australia, and the first in the world to deliver fingerprint sensor technology (Touch ID) to mobile banking logon in 2014".

However, we still await Westpac making Australian history as the second local major bank to finally allow its iPhone and Apple Watch using customers to enjoy the digital freedom of doing so, rather than finding their money has limitations on the way it can be digitally used.

Although Westpac customers are invited to express their interest now for the upcoming Westpac PayWear Essentials and Designer ranges at Westpac's PayWear page, no such page appears to exist for gauging Apple Pay interest, only a page listing Samsung Pay and Android Pay availability.

"The PayWear Essentials products are made of waterproof, tear-resistant silicone and include a wristband, and a ‘keeper’ which can be attached to an existing watch or fitness band. These products will be available for Westpac customers to order from early December, via their online banking or mobile banking app. PayWear Essentials will be free for a limited time."

About the 2017 Westpac Hands-free Payments Survey

"Westpac's survey of 1244 Australian adults (18-55) was undertaken in October to understand current payment and cash management behaviours and attitudes towards wearable payment technology. A cross-section of the Australian population was surveyed which is statistically representative of the national census."

Key findings from the research:

More in this category: « VIDEO Interview + DEMO: WalabotDIY lets your Android see thru walls for home renovations iPhone and Watch users rewarded with Wallet-based Woolworths Rewards app »
Share News tips for the iTWire Journalists? Your tip will be anonymous