Promising to set a "new standard in consumer SSD performance", Samsung has made its market-leading, super-fast solid-state drives even better "at affordable price points".

I've always loved Samsung SSDs, they've been my first choice when upgrading friends and family from older physical hard drives to Samsung's 2.5-inch SSD form factors, and while those drives are still available, the 980 NVMe SSD is in the M.2 form factor, which looks like a big stick of memory.

Of course, with modern laptops less upgradeable than before, its harder to upgrade some of them, but with modern desktop motherboards having M.2 slots, you can pop one of these into your motherboard slot and happily add one fo these drives to your computer very easily, and enjoy much faster speeds than your standard SATA-connected SSD or - shudder - old fashioned spinning hard drives which are primarily used to store large amounts of data, rather than running your main operating system, for which use cases old fashioned hard drives are simply too slow.

Now, Samsung bills itself as "the world leader in advanced memory technology", and while its competitors will argue with that, the 980 NVMe SSD is "the company’s first consumer drive without DRAM."

We're promised "the highest performance among DRAM-less SSDs (as of March 2021)", making the new 980's "blazing NVMe speeds more accessible to a wider range of users."

So, what makes Samsung's DRAM-less 980 different?

Previously, we're told that "DRAM-less designs have presented a disadvantage in speed without the short-term memory at hand for fast access to data.

This technology, coupled with the company’s latest sixth-generation V-NAND as well as optimised controller and firmware, enables the 980 to provide NVMe performance with six times the speed of SATA SSDs. Sequential read and write speeds come in at up to 3,500 and 3,000 MB/s, while random read and write performances are rated as high as 500K IOPS and 480K IOPS, respectively.

"The newly upgraded Intelligent TurboWrite 2.0 also offers significantly enhanced sustained performance over the previous iteration by allocating a much larger buffer storage area inside the drive. (TurboWrite region has been increased significantly, from up to 42GB in the 970 EVO to up to 160GB in the NVMe SSD 980).

"Additionally, consumers will no longer have to worry about their drive overheating, thanks to its advanced thermal designs. With Dynamic Thermal Guard technology, nickel-coated controller and heat spreader label solutions available in Samsung’s high-end 980 series, users can enjoy stable and reliable performance even during prolonged use.

"The SSD further features improved power efficiency of up to 56% when compared to the previous 970 EVO, allowing laptop users to better manage power usage." 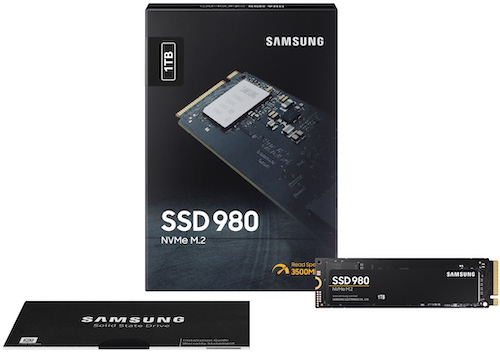