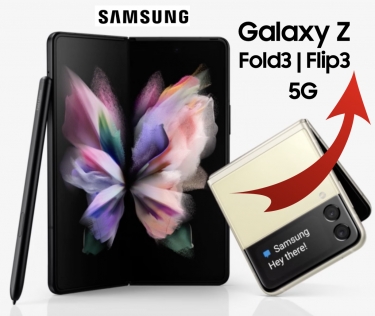 Ahead of retail availability of Samsung's Z Fold3 and Z Flip3 on Friday 10 September 2021, Samsung says pre-sale numbers are 20% ahead of last year's Note 20, which launched at a similar time.

Less than a week before Apple unveils its new iPhone 13 range, none of which are expected to offer folding screens for at least a couple of years, Samsung has announced its Galaxy Z Fold3 and Galaxy Z Flip 3 series pre-sales have hit a record, although physical numbers aren't on offer.

What is on offer is a range of pre-order offers for the Z series, which are obviously still available ont he 9th as this is being typed, but which presumably will be unavailable once the 10th rolls around.

Samsung's devices go on sale tomorrow, Friday 10 September, while Apple's new iPhones probably won't be available to pre-order for a least a week, and will probably then take another two weeks to go on sale at retail, giving Samsung and all of the other Android smartphone makers an extra window in which to try and make as many pre-iPhone 13 sales as possible.

Samsung says "total pre-order numbers for the Galaxy Z Fold3 and Galaxy Z Flip3 are 20% ahead of Galaxy Note 20 last year, which was launched at a similar time in 2020.

"The pre-orders alone for latest two Galaxy Z Series smartphones will see Samsung connect more foldable devices than in the previous 12 months, a clear indication that more Australians are keen to adopt the folding form factor."

Samsung also offered a special limited-edition range of the Galaxy Z Flip3 and Fold3, known as the Thom Browne range. Thom Browne is a celebrated American fashion designer, who now co-owns his brand with Ermenegildo Zegna, with Browne remaining as the Chief Creative Officer.

Samsung says the limited-edition Thom Browne range "is completely sold out ahead of general availability," and that "these devices, coupled with the Galaxy Buds2 and Watch4, as well as S Pen with a Galaxy Z Fold3, retail for $3,199 and $4,699 respectively, further reinforcing Australian consumers’ appetite for super premium smartphones."

Clearly, despite the lockdowns in Australia, people do have the funds available to make such purchases, especially when people can't take overseas or even domestic holidays, which will presumably help Apple and which has reportedly helped consumer electronics sales over the past year.

But that's not all, with Australians proving to be as colourful in their choices as we are in our global diversity. Samsung states "Australian consumers are also opting for a greater range of personalisation. For the first time, the majority of Samsung smartphones sold during pre-order are in colours other than black.

"With a variety of colours to choose from, 50% of customers have chosen a Phantom Green or Phantom Silver Galaxy Fold3, while two-thirds of the Galaxy Z Flip3 units sold are a colour other than black, including almost 30% being the striking Lavender tone."

Of course, colours on mobile phones and smartphones are nothing new, Nokia was well known for its colourful range of cases in the original digital mobile phone era, and Apple has long had a range of colours for its iPhones - who can forget the iPhone 5c series that really brought colours to the fore, along with the many and varied types of iPods in various colours during the first decade of the 2000s.

"These results have been achieved in an environment where almost 50% of telco retail stores are closed in Australia, forcing our customers to experience our upcoming products via digital experiences through Samsung and our valued partners. We cannot wait to get these incredible products into the hands of Australians on Friday September 10."

More in this category: « Apple's 'California Streaming' event expected to launch iPhone 13, Sept 14 in US, Sept 15 in Australia Logi Dock adds ports and a speakerphone to notebooks »
Share News tips for the iTWire Journalists? Your tip will be anonymous