Dyson is positioning the Cyclone V10 as a convenient alternative to mains-powered vacuums. Does it live up to that billing?

You'd hope the company has got it right, as it also announced that it has ceased the development of corded models.

iTWire's tests suggest that it has.

On minimum suction, the battery lasts at least 60 minutes, which is easily enough time to vacuum the hard and soft floors of a three-bedroom double-storey house plus the skirting boards – even using the powered heads that increase the drain on the battery.

Despite being on the lowest setting, the V10 did a good job of cleaning, and the wide heads picked up dust and most other debris right up to the edge. By the end of the task, there was no discernible drop off in performance.

Medium and maximum power settings can be selected for cleaning jobs that need higher suction at the cost of draining the battery more quickly (a three-LED display indicates how much power remains). About the only time we needed something more than minimum suction was to pick up some small leaves and seed pods that had blown in through the front door.

Three easily interchangeable heads are supplied with the V10 Absolute+. The direct drive head proved excellent on carpet, and, while it is also suitable for hard floors, the soft roller head is quieter to use on tiles and less likely to mark timber floors. 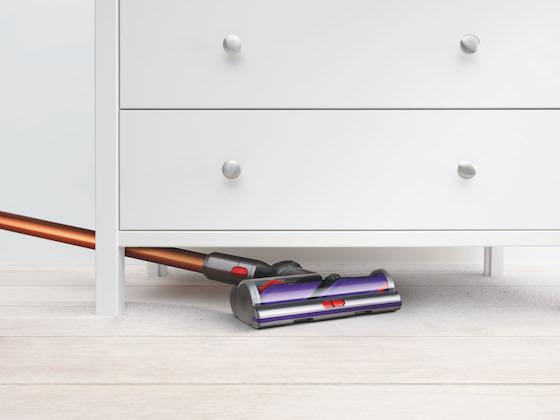 The mini motor head can be used for specialised cleaning, and we found it works well for removing dust from mattresses.

Other tools include the usual combination and crevice tools, a mini soft brush (making it easy to dust skirting boards and flat surfaces), a flexi crevice tool that's great for tight spaces and when combined with the extension hose is excellent for cleaning radiators, flyscreens and venetian blinds.

The push-button connectors make it easy to change tools, but they have a small internal ledge that collects a small amount of dust, and then spills it during the switch so you have to re-vacuum the area where you're standing.

Dyson thoughtfully includes a well-made accessory bag, but surprisingly its pockets aren't customised to the various heads and other items so you end up with most of them in the main compartment, which isn't very convenient.

Another area where "stick" style vacuums fall short of their corded counterparts is in dust capacity. It probably depends on how clean your house is to start with, but our experience was that the V10 bin is large enough not to need emptying more than once in an hour's use.

The V10's bin is co-axial with the tube, and a push lever makes emptying straightforward and with practically no mess. Our experience with emptying the V6 is that it is almost always necessary to vacuum around the garbage bin as some dust inevitably spills. But it's easy to put the V10's opening right inside the mouth of the garbage bin so nothing escapes onto the floor.

This bin opening arrangement also exposes the internal filter for easy cleaning, but in any case we found it was less prone to clogging than the V6's is. If you're worried that the bin opening lever seems stiff at first, don't panic: it soon loosens up.

There's also a combined intake and exhaust filter unit (the purple part at the back of the V10) that is easily removed for a periodical wash.

This powerful machine really can replace a regular vacuum, unlike Dyson's earlier stick models which were good but more suited to a quick tidy up. Although the V10 is heavier, you notice this mostly when using it above waist height, eg to clean cobwebs from corners or to remove the dust from extractor fan vents, and we feel this is more than compensated for by being able to vacuum the whole house cord-free.

But we can't finish without mentioning the price. Dyson has a reputation for delivering premium products, but $999 is a lot of money to pay for a vacuum cleaner (the V10 Animal version with just four tools is $100 cheaper). The V10 Absolute+ delivers on its promises, but whether or not the convenience justifies the expense is a personal decision.

More in this category: « Samsung to change iconic Luna Park face for Vivid Sydney VIDEOS: Norton Core, the high-perf Wi-Fi router with IoT security, is coming to Oz »
BACK TO HOME PAGE
back to top